We were pretty wowed by the Nest Hello when we reviewed it last year, given it earned our "Most Wanted" accolade. The only major drawback we found was the high $230 asking price, but today's deal over at Massgenie eliminates that. For the next 6 hours, you can grab the Nest Hello Smart Wi-Fi Video Doorbell for just $170. Act fast, though, as the deal ends today. 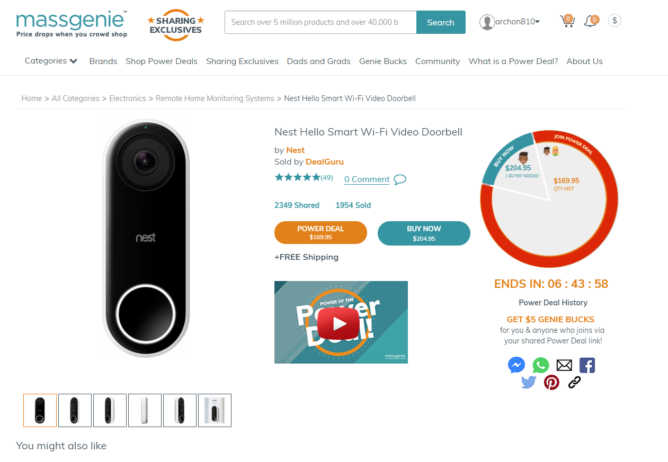 The Nest Hello is a smart video doorbell with a built-in HD camera (with night vision) and Wi-Fi connection that allows you to see who's at the door with a live video feed, speak to/hear them, and even get alerts. It integrates perfectly into the rest of the Nest smart home ecosystem, including all the Assistant-enabled speakers and smart displays you've probably got around the place. If you're all-in on Google's smart home vision, the Nest Hello is the doorbell to get — though you will need a Nest Aware monthly subscription to make the most of it.

Unlike the other well-known group discount site Drop, Massgenie doesn't have a long lead for shipping time on most items, either. Power Deals like these are expected to ship within one to two business days after completion, not several months later, as with Drop.