During I/O, Google outlined its vision for the fully gestural navigation system that debuted with Android Q Beta 3. In the fourth beta that arrived yesterday, some further refinements have been made to gesture navigation that make it a little smoother and more usable.

Probably the most notable change is that swiping up and holding for the recents screen is now more consistent and easier to trigger. You no longer have to swipe up so far to get it to work, and the failure rate, where you would see the recents screen tease you by almost starting before fading away, is no longer an issue.

Some users have noticed that the back gesture (swiping from either side of the screen) is being ignored on the left side for apps with a conflicting slide-out hamburger menu. This works for me on the Play Store right now, but not in Google Maps. It is what Google had said it would do during I/O, with the first swipe bringing out the menu and the next one closing it. The inconsistency with the way this works at the moment is likely to do with the exclusion zones that can be baked into apps, but we can expect it to work a lot better by the time the final Android Q build rolls out.

You might also notice that the animation for the back gesture has changed a little bit. It's got a more pronounced bounce to it in Beta 4. If you do it slowly, as though you're not entirely sure you want to go back, it'll vibrate once to tell you the back button has been activated, and then again when you lift your finger off the screen to go through with the back action. The indicator is now more solid, too. If you're using an app in full-screen, such as a game or image viewer, the back gesture is now disabled, presumably to avoid accidental triggers. To go back, you first need to pull down from the top to get the status and navigation bar back on screen, or use the navigation in the app itself. To get out of a full-screen app you have to swipe up from the bottom to go home. 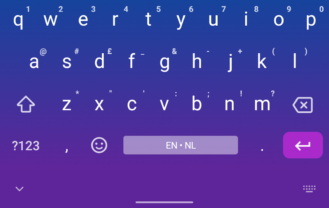 Another change we've already covered brings back the popular rotation switch as a floating action button just above and to the side of the gesture pill — I'm sure glad to see it return. When you have the keyboard open, the buttons for choosing a different keyboard and hiding it are now a little more out of the way and in the corner. There's still a sizable amount of unused space there, though. Apparently, swiping up for home now plays nice with YouTube's picture-in-picture mode too. In case you're wondering, swiping in from either bottom corner is still the method for accessing the Assistant, although I wouldn't be surprised if Google thinks up a more elegant solution in the future.