As we continue to wait for things like proper spam blocking and true universal RCS support for everybody, we can still look to Google Messages to bring some new features. The latest update is testing a new Assistant integration in the attachments screen, and a teardown shows that Federated Learning is growing beyond its starting point in Gboard. There's also a hint about a reminder notification that could help us deal with messages a little more efficiently. 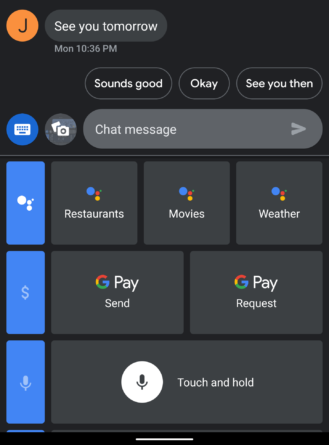 Earlier this year, Google committed to bringing deep Assistant integration to the Google Messages app, and we've already seen this going live for most people, at least where it's supported. These obviously weren't going to be the last of the changes, and now another element of the integration is emerging in the attachments menu. A new row of three tiles was added to the top of the menu, each launching Assistant-powered suggestions for Restaurants, Movies, or Weather.

This new attachment row appears to be a pretty limited rollout at this time, but it could begin rolling out more widely at any time.

One of Google's most recent talking points around AI and crowdsourced data has been Federated Learning. This technique enables individual devices to build data models from machine learning and contribute just the model to the cloud without sending back all of the data. We've already seen that the Gboard team is in the process of implementing Federated Learning to share common words and phrases as they evolve to become standard parlance, and now Google Messages appears to be getting in on the game, as well.

The new text belongs to a popup that describes "smarter features" like Smart Reply and GIF suggestions that improve as you use your phone. The popup will link to a settings page with text that affirms your personal info isn't sent to Google and a setting to the mode on or off.

It makes sense to bring Federated Learning to both Google Messages and Gboard so users of just one app can gain the benefits of data models provided by both.

Most of us have probably done it before: A message comes in and we're too busy to deal with it, so we ignore it. Maybe we read it and intended to reply, or maybe it gets tapped by accident, or the phone gets restarted and the notification is lost... it doesn't matter. Days or weeks later, we stumble onto that message and realize somebody has been waiting for a response all this time, and we look like jerks for ignoring them.

It looks like Messages may be adding an option to combat the curse of forgotten messages with a simple reminder notification that can be scheduled to appear 1 hour later. The button to initiate the reminder could be joining the Mark as Read and Reply notification actions, or perhaps it will be headed for the chat history window.

A feature like this can be simple to use and help people stay on top of messages that come at inopportune times. However, it also reminds me of that neat Follow-up feature that was added to Gmail and Inbox (RIP), and I would like to see something like that.