Being a Samsung Pay user, I really appreciate how convenient it is to summon the app when I'm about to pay or need to show my membership card to the cashier. Indeed, a simple swipe up from the lock or home screen brings up my wallet. Apple and Google have taken a different approach, where their payment software is automatically launched when you place your device near an RFID reader. However, iOS users can also double tap the power button to bring up Apple Pay, which is — at least in my opinion — more convenient, as it lets you choose the card you want to pay with before completing the transaction. Google has implemented a similar feature in the fourth Android Q beta, which turns the power button into a shortcut to display your cards and passes.

In addition to offering quick access to your cards, this shortcut will make it easier for commuters to use their transportation passes by simply long pressing the power button. Indeed, thanks to the new Passes API, many more transit providers will be able to digitize their tickets in Google Pay and use QR and barcodes for authentication. As these don't work with RFID technology, Google had to provide a quick way to access these — and merely decided to replicate Apple's. 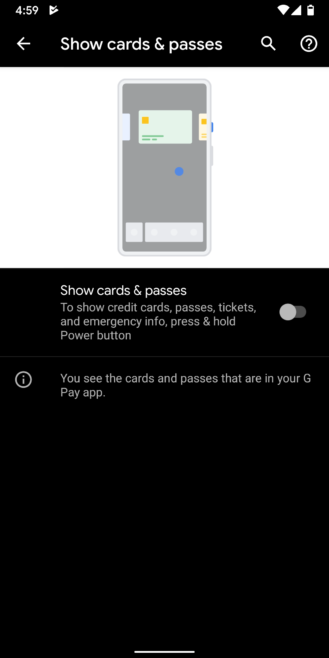 In order to activate the new functionality, you'll first need to run the below ADB commands. This will add a new Cards & Passes option in the gesture settings, from where you'll be able to toggle Show cards and passes on, as shown in the screenshot above.

When turned on, you'll have to long-press the power button to quickly access yours cards and passes. this will also change the traditional power menu's layout, as the standard options are now moved to the bottom of the screen. Unfortunately, the feature doesn't seem to be functional yet, as we couldn't get it to display any cards.

Android 10 is now officially released and the feature has been confirmed by the official website. However, it's still not functional. A server-side update is likely needed to turn it on. Thanks, Ben!