Hold your collective breath, people... Google is using some sort of logic to order the Share menu on Android Q Beta 4! I kid not. After the many messes we've seen the Share menu go through, I'm just really incredibly happy that there's a sense to the madness now. Whether you agree that an alphabetical list is the best way to order the menu or not, it doesn't matter. At least there's a clear order now.

You may remember that Android Q Beta 1 and 2 introduced some changes to the way the Share menu works in the background, with a new push system for apps instead of pull speeding things up. Beta 3 then made more modifications: it reinstated the eight Direct Share targets but removed app pinning.

Q Beta 4 builds on top of that with two major improvements. First, the app list is now alphabetically ordered, as you can clearly see in the screenshot below. So you should easily know where an app is, without having to parse left and right, top and down, through dozens of icons while looking for that elusive one you need. 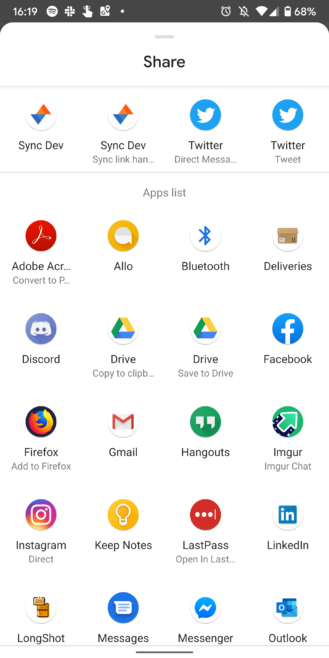 Order, thy name is alphabetical.

Next is a new row for four suggested apps sandwiched between the Direct Share targets and the full alphabetical list. When the Share menu is first opened and still collapsed, you only see four Direct Share targets and the four recommended apps — no full list of apps here. When you swipe up, the menu is expanded and you get the eight targets first, then the row of suggestions, followed by the full apps list that you can scroll through.

The suggested apps seem to change based on context (i.e. what you're sharing) and past usage. As you can see in the screenshots below, sharing a link generates other recommended apps than sharing an image. For the former, copy to clipboard and Gmail surface, whereas uploading to Photos or adding to Maps comes up for the latter. (Note the weird Android Beam suggestion, which only points to the Feedback app — Beam is still dead, unfortunately.)

At this point, I can say I'm almost, just almost, OK with the way the Share menu works in Android. I'd still love to be able to pin my own choice of four apps to that suggested row, and possibly even pin Direct Share targets that I use the most. Removing unused apps would be the cherry on top of the cake. Oh and now that we're doing things right(ish), can we get rid of the non-native Share menus that some apps like Photos, YouTube, and News use? No one wants to see twenty different interfaces when trying to share something. It's confusing.