Last year, Google speculated it might be possible for Android devices to boot a GSI (Generic System Image) without needing to unlock the bootloader and flash it. That functionality was shown off as working just recently at this year's Google I/O developer conference, under the name "Dynamic System Updates," or DSU. (It's not the most descriptive name, since DSU effectively lets you live boot into other Android images.) We were told the functionality would eventually make its way to Android Q, and as of Beta 4, it has.

Dynamic System Updates work by loading an image (such as a GSI) into a new "dynamic" partition which Android can boot from. This allows for the stock system image to be preserved while you're running an entirely different image, sort of like running a live image of Linux off a thumb drive, if you've ever done that.

Google's documentation for DSU states that the feature has been enabled on the Pixel 3 and Pixel 3 XL as of the Android Q Beta 4 release, though it's a bit complicated to get it working. You'll need to run a specific ADB command to enable the feature, and further invoke it over an ADB shell as well. 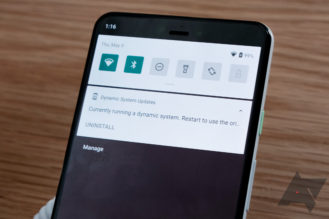 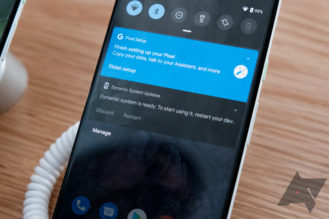 We played around with the feature a bit at I/O, and although the GSI which was being run on the devices we tried was pretty bare, it was an interesting demonstration. In the future, DSU could be used to allow developers (or enthusiasts) to run newer or specific versions of Android without having to purchase different devices. There's also much less risk compared to flashing a ROM, since you can always return back to stock with a reboot, if necessary.

DSU may even allow for running ROMs in the future without needing to unlock your bootloader — though right now it requires that GSIs be signed by Google or your device's OEM to work.

At the current time, DSU images can't be larger than 1.5GB, and right now it's a bit more complicated to get it working than your typical unlock bootloader -> flash (or boot) custom recovery -> flash ROM workflow. The enterprising enthusiasts over at XDA will certainly try, though.

Notification options are easier to understand in Android Q Beta 4