"Run and gun" has become a mantra for many YouTubers and filmmakers these days. It doesn't matter if you're a travel vlogger or directing a short film, you're probably eager to begin cutting together footage on the ride back from the field, not waiting until you're back in the office (or at home). There are plenty of good video editors available for Android, but none of them offer a seamless transition between working on a smartphone or tablet, then moving to a desktop to do finishing work. Today, Adobe is bridging that gap with the launch of Premiere Rush for Android.

Adobe originally announced Premiere Rush (then called Project Rush) back in June 2018, and it was launched on iOS and desktop in October with the Android version scheduled for 2019. 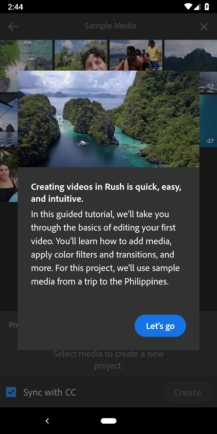 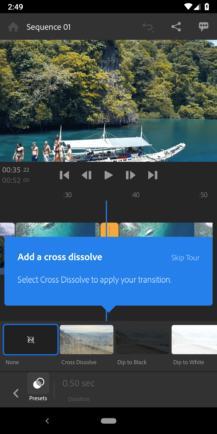 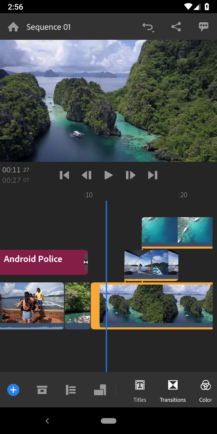 Premiere Rush targets people that produce video for YouTube, Facebook, Instagram, and other social media. The interface has been optimized for quickly editing and posting videos while still supporting some of the advanced features of the full-sized platform, Premiere Pro. To that end, anything created in Premiere Rush can be synced over the cloud and opened in Premiere Pro.

If you haven't looked at Rush before, the features line up pretty well for what you want from a mobile app. At a high level, there's a full video editor with a multi-layer timeline where you can adjust and sequence clips, audio, titles, and even transitions. It's even pretty easy to orient side-by-side clips in a single frame.

Video clips, photos, and audio can be added from local storage, a linked Dropbox account, or your Creative Cloud account. You can also capture video and audio directly from within Rush if you want to fill in anything without switching apps. 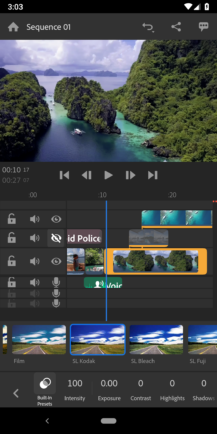 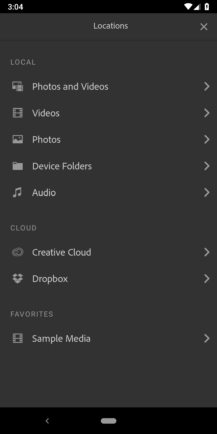 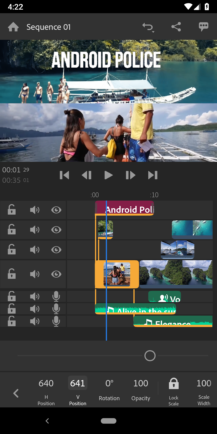 Things get interesting with the more advanced capabilities. Rush supports Lumetri color presets and custom LUTs created in Premiere. Externally created LUTs aren't supported yet, but they are planned for the future. You can also use motion graphics, including customizable templates, which you can create on a desktop or download directly from Adobe Stock.

There are also some limits to the app that might be important when considering your workflow. Some of the popular Premiere Pro capabilities are missing, like keyframes, video effects, speed ramping (or any speed adjustments), and masking. This means that you won't be able to animate movement of your clips or titles, create advanced overlays, or turn slow drone footage into something a bit more epic. In short, this won't cut it for some of the more advanced travel and lifestyle vloggers.

In my brief time using Rush, and having a bit of prior experience with Premiere Pro, I found it was really easy to learn and use and I could accomplish most of what I tried to do with very little fiddling. This is definitely one of the easier editors I've seen and it's quite intuitive. After speaking with a few other people that tried Rush, it seems we all ran into a few roadblocks where the app just lacks some feature we feel like we really needed (e.g. speeding up drone footage or keyframing), but Adobe seems to be adding features pretty quickly, so these things might be resolved soon. This will be a good tool for most people, assuming they don't need any of the more advanced features and the subscription pricing doesn't get in the way.

Adobe is being fairly conservative with device support at this time. The only hardware confirmed to work with Premiere Rush are the two most recent generations of flagships from Samsung and Google, and also the OnePlus 6T (pretty likely the 7 and 7 Pro will be on here shortly). Here's the full list:

Adobe just announced that three new phones were added to the list of supported devices:

There's still no word about the recently released OnePlus 7 / Pro or Pixel 3a / XL, but Adobe will probably test those and several other phones and add them to the list soon. Also, as some people have pointed out in the comments, plenty of unsupported phones work just fine.

If you're wondering about Chrome OS support, Adobe confirmed to us that this is definitely planned, but it's not ready to launch yet.

Samsung made an announcement that explains there are some device-specific aspects that may be of interest to some users. Evidently there are some GPU optimizations that will speed up video exports on the Galaxy S10. Samsung says that this will make for up to 70% faster exports, but that's in comparison to the Galaxy S9, so it's hard to quantify the difference. Adobe has also implemented HDR10+ and Samsung DeX support. Additionally, Samsung users that subscribe to the Rush-only plan will get a 20% discount (7.99 / month) for the first year.