Facebook is trialing a way to personalize the engagement its users can have with the content on its platform. Avatars are currently being tested in Australia as a Bitmoji-like addition to standard reactions and generated GIFs. A global roll-out is reportedly targeted for later this year at the earliest, but there are questions about how big of a draw this feature will be for existing users as well as departed users that may want to make a return.

In an interview with TechCrunch's Josh Constine, Facebook that it doesn't necessarily mind the comparisons to Bitmoji, which Snap, Inc. acquired in 2016. In so "copying" its competitor — to be fair, Bitmojis' cartoonish aesthetic contrasts with the skeumorphic approach Facebook has taken here — the company has sought to bring digital personal representation to scale for more than a year, according to what Constine described as latent code in the Facebook Android app.

Users can create their two-dimensional Avatars by tapping a smiling emoticon and selecting from a series of characteristics across 18 traits. Colors are wide open for aspects such as skin and hair and there are religious garbs available if people so choose to identify themselves in such a manner. The company is planning an update that will bring more age-based attributes like wrinkles. Facebook is sensitive about having users take a photo and having artificial intelligence generate a base Avatar to start with. All clothing and accessories are free at this stage, but Facebook acknowledges that it has an opportunity for branded wardrobes.

Users will then see their Avatars appear whenever they tap into customizable sticker packs. They can then choose a sticker to use within a post or a comment on a post. Sooner or later, Facebook may allow users to visually identify themselves by Avatars for profile pictures or in Groups, allowing for some form of anonymity in quasi-public or public squares. 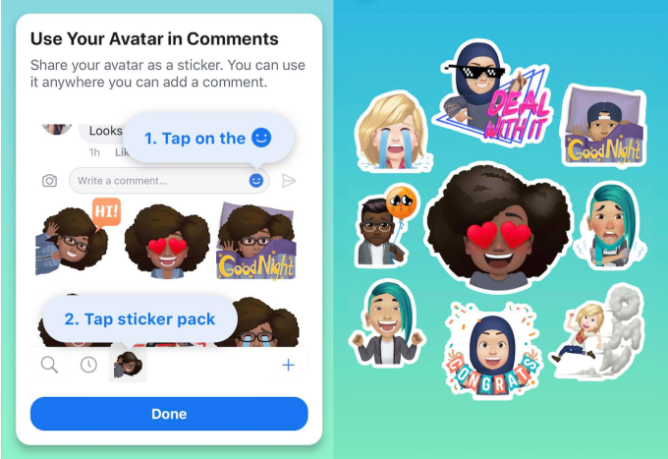 Facebook has appropriated competitors' features for its own gain before. However, with stains from debacles about privacy, political influence, and content screening, its brand equity may be doing just a tad worse than Snapchat's these days. A big question here is whether Avatars might make their way over to Facebook-owned subsidiaries Instagram and WhatsApp, where their presence would have different utilities and different monetization opportunities. The presence of Avatars on Facebook proper doesn't necessarily help the company battle its reputation brought about by its other failings.