It has been ten years since Rovio released the original Angry Birds on iOS, and in celebration of this anniversary as well as the upcoming release of The Angry Birds Movie 2 (August 14th), it would appear that the developer is eager to launch a new mobile game that ties into its licensed products. Angry Birds Explore offers just that as an augmented reality mini-game collection that contains many of the characters from The Angry Birds Movie 2.

Over the years Rovio has explored many different ways to utilize the Angry Birds franchise, what with its assortment of casual bubble poppers, two movies, and of course a ton of retail merchandise. The release of Angry Birds Explore on the Google Play Store offers an entirely new angle to advertise the franchise through the use of augmented reality. While AR may not be a new tech to Rovio, this is indeed the first augmented reality Angry Birds release on Android, and it would appear that it's a free promotional product that can interact with an upcoming film and its merchandise.

If you've ever played an augmented reality game on Android, then you are probably aware that these sort of titles can be finicky to control, and Angry Birds Explore does not differ on this front. You're going to want to play in a brightly lit room or outside in the sun. At first the gameplay revolves around a single mini-game where the player is tasked with growing worms, but once you earn some in-game currency there is more content to unlock. You can also decorate a hut that exists in the in-game world as well as take pictures of a few different Angry Birds characters in real-world surroundings, plus there is an area to scan product codes, which should add more content to the game as these codes hit the market. 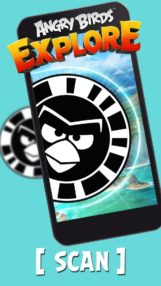 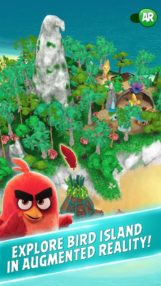 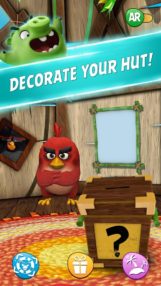 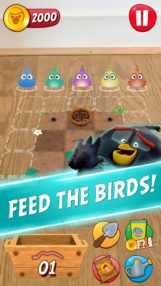 Angry Birds Explore is available on the Play Store for free, though it does appear to be a promotional product. This means the gameplay takes a back seat to the title's ability to scan branded merchandise and tie into an upcoming movie. I suppose it could be fun to snap a few pics of your favorite Angry Birds characters or decorate a hut in the in-game world, but past that there isn't much to explore as of yet. Hopefully, Rovio will expand on the title in the lead up to the release of The Angry Birds Movie 2.