Last month, phone manufacturer Yota Devices declared bankrupcy and began shutting down. That company was best known for its Yota Phone, a phone with an e-ink display on the back for on-the-go reading. If you're still longing for a phone with a paper display, the 'Kingrow K1' might be the answer.

The K1 launched on crowdfunding site Indiegogo a few days ago, and has now earned nearly $60,000 as of the time of writing. It's a fairly typical low-end phone, save for the e-ink screen on the front — the specifications include a MediaTek 6763 processor, Android 8.1, 2GB of RAM, 16GB of internal storage, and support for microSD and dual-SIM. The 'IGG Special' price is $299 (final pricing will be $349), and shipping is expected to begin in August of this year. 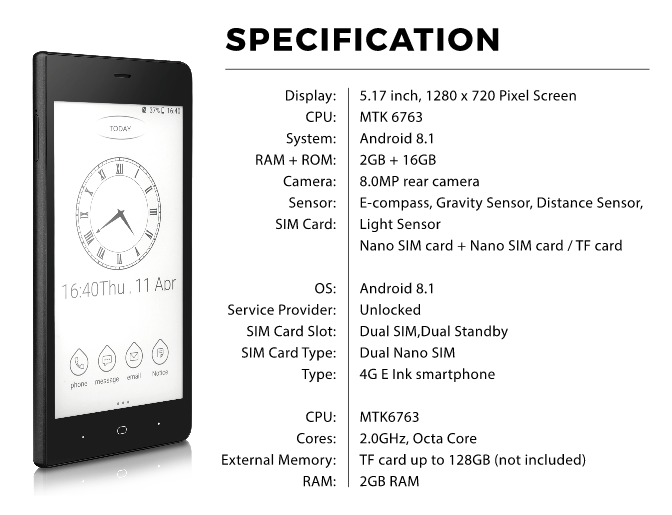 To be clear, you should not back this. I wasn't able to find any public information about 'Kingrow Electronic Technology,' and the $5,000 flexible funding goal is fishy — I'm no product engineer, but I'm pretty sure it takes more than the price of a used 2004 Toyota Corolla to bring a phone to market. Even if the device does become a real product, it lacks support for common LTE bands in the United States, the specifications aren't great, and Android 8.1 is getting a bit old.

Still, perhaps this will encourage other manufacturers to produce phones with e-ink displays. With the tech industry's growing focus on health, such a phone probably wouldn't be too hard of a sell — until the buyer tries to watch a YouTube video, anyway.