I've had mixed feelings about Huawei phones for years. The company's intrusive EMUI software was to blame for much of that, but a history of  sub-par camera performance and its spotty update track record didn't help. When we reviewed the Mate 20 Pro, we saw a lot of progress, with Huawei shipping a phone with the most recent version of Android mere months after it had launched. Stellar cameras, flagship performance, and an excellent OLED display hit the point home: Huawei was very ready to play in the smartphone big leagues.

Fast-forward to 2019, and the P30 Pro takes what made the Mate 20 Pro great and just keeps building on it. The ugly bar notch has been banished, and a new third-generation in-display fingerprint scanner makes for a far more tolerable unlocking experience. There's also a brand-new 5x "periscope" zoom camera on the back, and it's just kind of incredible. The P30 Pro isn't just the best phone Huawei's ever made, it's one of the best phones period.

The problem is that it now exists under the long, dark shadow of a US trade ban, which has forced Huawei into an untenable position: simultaneously promising to support its existing products and promising to switch (some?) future ones to an entirely different operating system. So, will the P30 Pro get Android Q? Probably, but we don't know. Will it switch to another OS entirely? Probably not, but again, we don't know. There is so much about the future of the P30 Pro that we don't know that it's difficult to recommend outright it in the present, for all but those who are willing to take a chance. 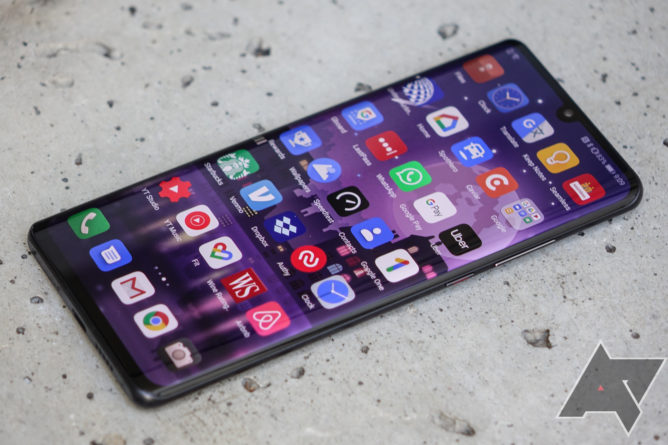 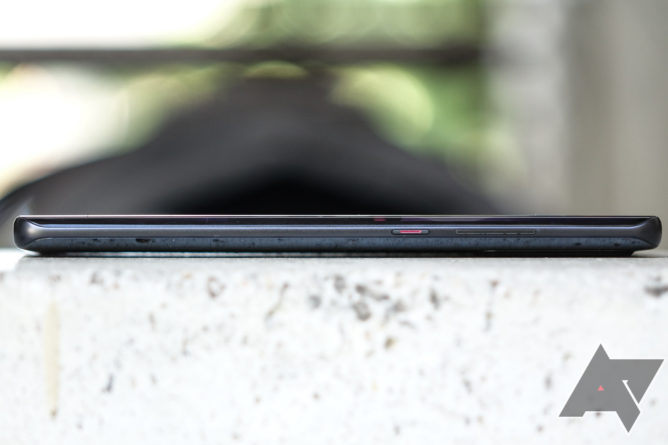 The P30 Pro doesn't, at first blush, do a whole lot to stand out from the growing throng of glass-and-metal sandwich premium phones. But little touches like the vertically-aligned branding on the back of the phone make it look a bit like a point-and-shoot camera from the future, an aesthetic that was first introduced on the P20 Pro last year and which I still think works well today. The size of the P30 Pro hits the "just right" point for my hand, with it being just a hair narrower than the Galaxy S10+. I like big phones, though, so I can't say it's going to be a good fit for everyone - no doubt many people consider the S10+ to be gigantic, while I'd reserve such descriptions for the Galaxy Note9 and OnePlus 7 Pro (true chonkers, as our own Ryne Hager would say).

The FHD+ OLED display gets very bright, colors seem accurate, and viewing angles are impeccable. The panel used is manufactured by BOE, and while with the display off the substrate has a slight mottling effect, it's not visible at all when the screen is illuminated. I was pretty surprised to learn this wasn't a Samsung panel - it's that good. 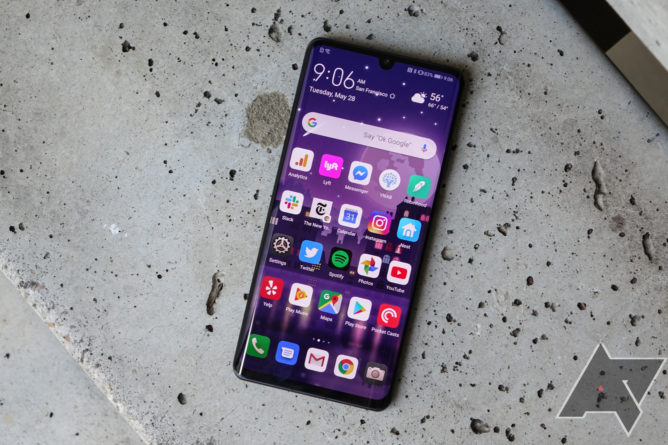 The bottom-firing speaker is a bit of a disappointment, loud but fairly distorted and tinny at high volumes, and the headphone jack is nowhere to be found. I had no issue using Google's USB-C earbuds or OnePlus' Bullets Type C, though, and given the availability of reasonably good USB-C earbuds, I find myself missing the headphone jack less and less these days.

While I didn't have a chance to test it myself (EU wall plug), Huawei's ultra-fast 40W Supercharge will theoretically top up the P30 Pro's hefty 4200mAh battery faster than even OnePlus' most recent Warp Charge iteration. Super quick wall charging is increasingly popular among Chinese OEMs like Oppo, Vivo, and Huawei, and it's not hard to see why: nobody likes waiting around for their phone to charge. I've used similarly quick chargers on phones from other brands, and they really can be critically effective when you just need a quick top-up before heading out for the night or you're about to hop off a long flight.

In the box, you'll find the aforementioned wall charger, a SIM removal tool, a clear TPU plastic case, and the phone itself. 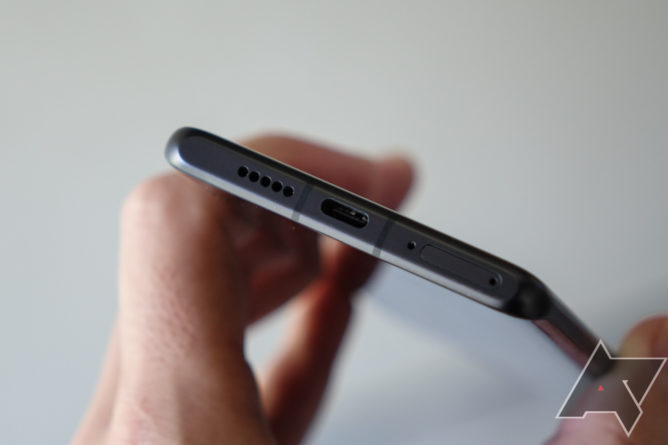 Huawei's latest version of EMUI is built atop Android 9 Pie, and the changes seem to become progressively fewer which each iteration of the interface. While still heavily visually skinned, EMUI's functional alterations to the software are -mercifully - generally in the interest of adding features and options versus modifying stock Android behaviors, which wasn't always the case. 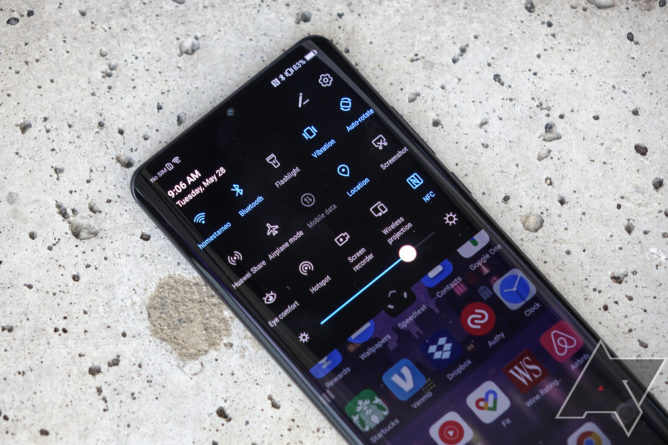 There are two areas where Huawei's changes still irk me, though, both of which relate directly to notifications. First, EMUI aggressively sleeps apps in the background, frequently delaying push notifications from apps that have no problem displaying notifications instantaneously on my Pixel 3 XL or Galaxy S10+. Apps with critical notification priority like Nest often serve notifications minutes after they should have pushed. Exempting these apps one by one from Huawei's sleep system does resolve this, but it's a step I shouldn't have to take in the first place, and one which normal users simply aren't going to. This is, in my estimation, a holdover from Huawei's more China-centric software design ethos, in which notifications are seen as an annoyance, not a tool: in years past EMUI went so far as to suppress notification visibility for basically every newly-installed 3rd-party app by default. Huawei should be utilizing Android's built-in adaptive battery system, not hijacking and killing background processes in a way that is not readily visible to the end user. My other gripe is far smaller: notifications are often served by default in the collapsed view, obscuring quick actions until they're pulled open - making one of Android's most useful features a bit annoying to access. 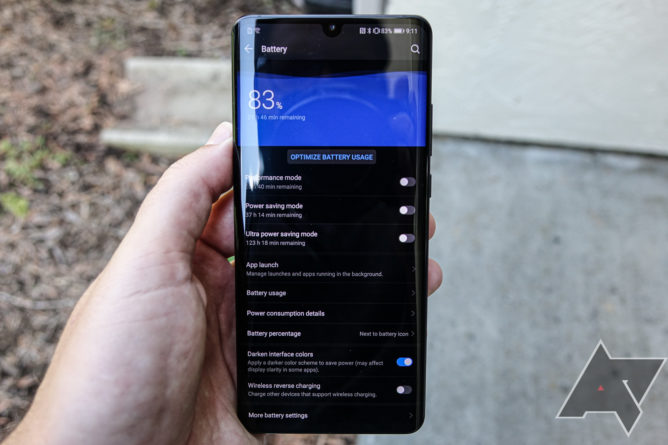 Otherwise, EMUI in its latest form is the most usable the software's ever been. There's even a Google Feed pane on the left-most homescreen. While it does lack an app drawer, it's easily replaced if that's something you want. Performance is excellent, and the P30 Pro feels nigh-unflappable in most situations. The one context that it doesn't is rather odd to me: YouTube. Probably owed to some kind of lack of hardware acceleration or codec compatibility on the P30 Pro's GPU, YouTube performs badly in pretty much every respect: basic scrolling in the app is lethargic (especially when a video is playing) and 4K videos cause the whole app to noticeably stutter. Also, PiP background playback isn't supported, though it's possible that's because this a European market device.

Battery life on the P30 Pro is nothing short of incredible.

The only other real bug I've had while using the phone is that the navigation keys at times simply don't respond to my presses. I get haptic feedback and the button animation, but then nothing happens. It's a documented issue in EMUI 9 (and has been for a while), and the best way to get around it is just to switch to gesture navigation, and Huawei's implementation is pretty similar to Google's in Android Q. It works well enough, and if only to escape the annoying button bug, I never went back to the traditional keys after turning it on.

Battery life on the P30 Pro is nothing short of incredible - I easily consider this a two-day smartphone for my typical use case, and a phone that can last a full day even during intense tethering and outdoor screen-on conditions over LTE. 4200mAh is no joke for a phone of this size, and Huawei's annoying notification delays probably help get even more mileage out of that massive battery. 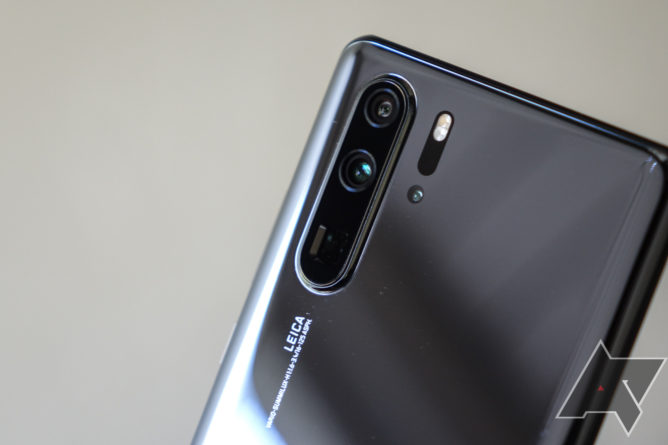 The hype has been earned. That's about the highest praise I can heap on the P30 Pro's cameras, which not only are impressive for their quality, but for the sheer versatility and effectiveness of the imaging system Huawei has assembled. The periscope lens is a game-changer as promised, and the main camera and wide-angle systems are both near the top of their class in the larger smartphone world. Still, it's that 5x optical zoom sensor that has made a total convert out of me: I absolutely need this on my smartphones going forward. Not only was Huawei first to market with a system, I can say confidently that its implementation is excellent. While the fun 50x zoom images various influencers shared from its Paris launch event were a fun party trick, it wasn't until I spent some time using the periscope camera as an action, close-up, and landscape system that I truly began to fall in love with its sheer versatility.

Beautiful skyline photos? Check. Amazing close-ups of shapes that provide dramatic perspective and sharp detail? Check. You can literally shoot a plane flying through the air with this camera, provided you've got a steady hand and not too much lens flare. I even managed some half-decent action shots of race cars at speed (this is much harder than it sounds), though that was where I really ran up against the practical limits of smartphone camera processing. 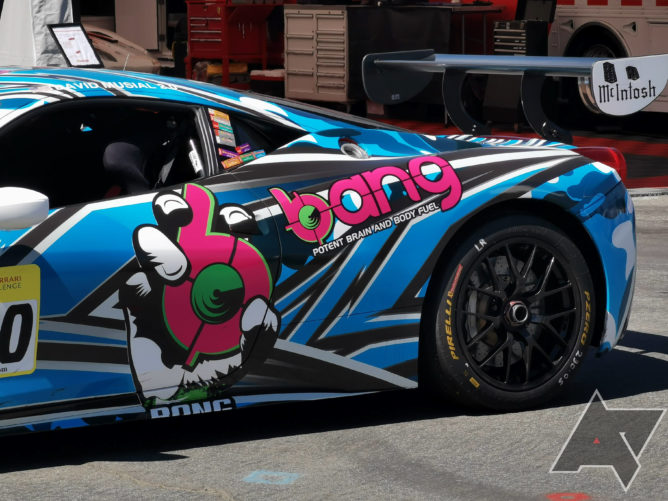 Not only is the 5x zoom useful, the sharp detail it captures is legitimately impressive.

Does the main camera have an odd yellow tint sometimes? Sure. Is the wide angle my favorite implementation on any phone? Nah, Samsung's is better. But as a system, as a camera with the ability to adapt to most needs and do so competently? It's the best there is. The fact that Huawei's (automatic) night mode is creepy good is really just icing on the cake. Maybe, leaning yes. We all know the problem with buying a Huawei phone right now: it's hard to say what support is going to look like a couple years down the road. There's just no certainty. But we can say with a fair degree of confidence that Huawei will continue to update and support the P30 as much as it is reasonably able to, and given how much work is likely already done on the Android Q update, that it will probably get the new version of Android - albeit later than other phones. And given how long some OEMs like LG and Samsung take to update their premium devices, it's entirely possible Huawei still won't look all that bad by comparison. I don't believe there's any reason to think Google's services are going to be ripped away from this phone, or that Huawei is going to give up on Android and summarily flash all its phones to a new operating system. It would be a disaster, and one which would only serve to lose Huawei even more customers. 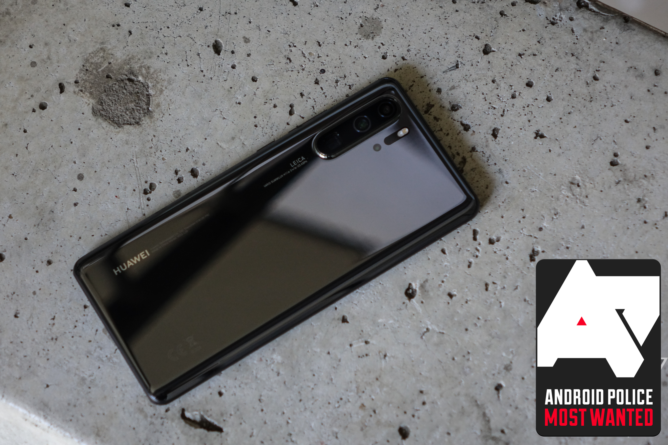 Speaking to the P30 Pro holistically, even with the above considerations, I believe it's an excellent smartphone on the merits - and as such we'll be awarding it our Most Wanted pick. Its excellent performance, stellar battery life, and unmatched camera system don't just make it worthy of comparison to the very best Android has to offer - they often make it the superior choice over its rivals. OnePlus has come a long way with cameras, but the P30 Pro bests them without much effort. Samsung's battery life is much-improved on the S10+, but nowhere close to being that of a 2-day smartphone. And Google, well... the Pixel 3 XL is not aging especially gracefully.

The P30 Pro has its obvious drawbacks, but even in spite of them, it's a superb phone that's easy to recommend for some equally obvious reasons.

Play Movies rentals for popular films start at $0.99 this weekend