YouTube is undeniably one of the most influential platforms in the world; and when it comes to product marketing, there's no place better. Google recognizes this and is preparing to integrate Google Shopping into YouTube in the near future. While there are plenty of implications, we're going to focus on a specific feature that uses AR technology to help customers shop for makeup.

YouTube will begin by featuring lipstick, at least for now. When somebody watches a video that features products by select partners, a button will appear that invites the viewer to "Try on lipstick." Tapping on the button will open up a view of your face through the selfie camera, but your lips will be digitally painted with the advertised lipstick. It sounds like you'll also be able to switch to different shades from the same brand.

The test of a feature like this is how realistic it will look in practical application. Not only will people expect the camera to keep up with them, it will have to be deliver a near perfect recreation of the lipstick shade in whatever lighting people are in, otherwise customers will be angry about receiving something different. As it turns out, Google has already published a blog post where it demonstrates having done this exact thing with ARCore and some clever AI, even going so far as to mimic specular highlights (those small reflections in an image that show up as white). 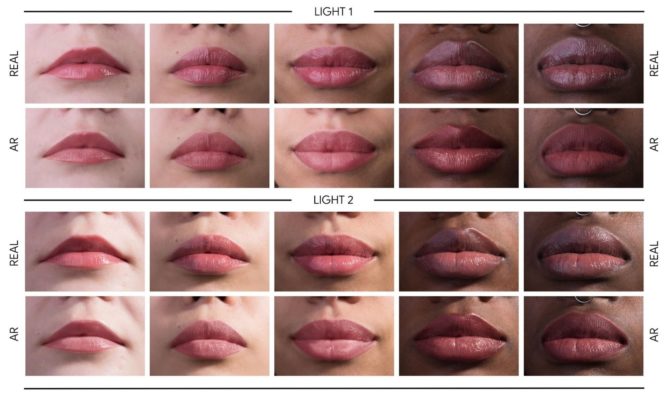 This all might sound like just another gimmick to show off Google's assorted technological achievements, but there are reasons to think Google may be aiming higher than just creating another tech demo. While this feature will surely be made available for select corporate partners, it might become part of a larger strategy.

Earlier this month, Google Express received a rebranding and new design, turning it into Google Shopping. As part of the announcement, Google touched on plans to integrate YouTube with Shopping, which is expected to add a referral system as an additional avenue to monetize videos. While it may be a coincidence, the massive makeup conglomerate Estée Lauder Companies was specifically mentioned as a partner.

With the explosive growth in popularity of beauty bloggers and makeup gurus like Jeffree Star, James Charles, Tati Westbrook, and many others, it's not hard to imagine Google wants a piece of the action. Many of these channels are giving product recommendations and driving huge sales. By offering a tool to simulate lipstick and other types of makeup directly from the app, Google has an opportunity to snatch up many of those shoppers before they order somewhere else. And if this works out, we can probably expect to see many more of these virtual try-on experiments in the future.