For months now, Google Maps has asked users who upload photos of food and drinks at restaurants to tag their images with the dish name. That crowdsourced information was bound to be put to good use at some point, and according to a few tipsters, there's a new Popular dishes feature in restaurants' Menu tabs that uses these images and tags to show you the most liked dishes.

Open a restaurant, check if it has a Menu tab (some don't), and the first screen should be the one for popular dishes. Large image thumbnails are used, with the numbers of pictures and reviews for each dish below. Choose any dish and you'll get a carousel of user-submitted images, a list of all reviews that mention it by name, and an edit button to fix mistakes or report a wrong dish. 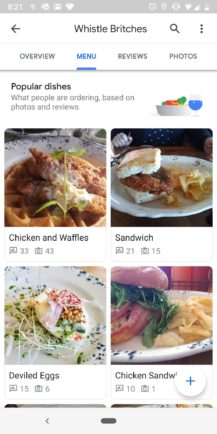 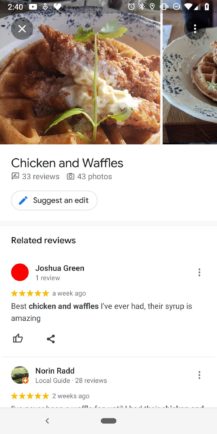 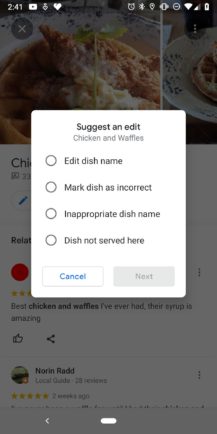 For restaurants that already have a detailed menu uploaded to Maps, the Menu tab will display these popular dishes first, then the text menu in the following sub-tabs. Other things worth pointing out are a floating + button to upload images of dishes straight from here, and a carousel at the bottom of dish pages to quickly jump to other dishes served at the same place without going back to main tab.

The popular dishes feature has been showing for some users for a while, but we just came across it and noticed it hasn't rolled out to everyone just yet. Despite checking the same restaurants listed above, being on the latest Maps version (v10.15.1 on APK Mirror), and a Level 7 Local Guide, I don't see these dishes. Several other users confirmed that it's not live for them yet, so as with all things Google, your mileage may vary widely.

It's been a few weeks — nearly a month — since we first started getting reports of popular-dish recommendations coming to Maps, but as we noted at the time, availability was pretty darn spotty. While back then it wasn't clear just who did and didn't have access, Google has sorted everything out by now, and today announced that Android users around the world are now able to see these recommendations. Apple users will get support on their phones within the next few months.