Bugs and faults may be present in this beta-grade software — such is the nature of the beast. Importantly, Insiders will not be able to switch to Slow or Release Preview rings without performing a clean installation, so if you're in the position to take this on, be cautious.

If you've wanted the ability to mirror your phone's display on your computer, the good news is that Phone screen is coming to two new devices: the Galaxy A8 and A8+. They join 11 other devices from Samsung and OnePlus in being able to do so. As a he PC must have Bluetooth LE radios to connect with the phone directly and be on build 18338 or later. 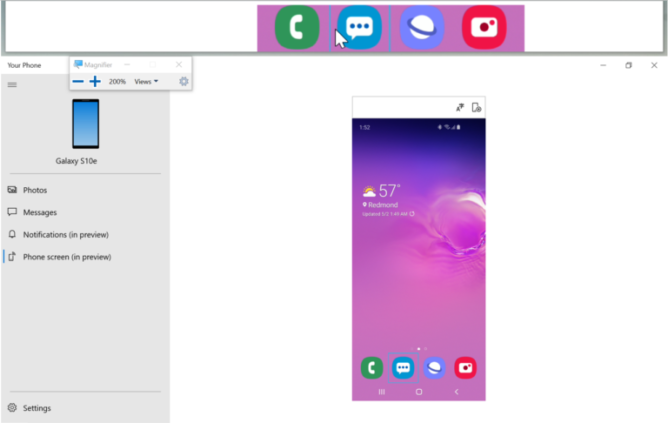 Those who mirror their screens will be able to utilize two new accessibility tools in this build: Screen reading allows Windows to dictate text selections from the screen as you manipulate your phone from your PC; Focus tracking provides a pop-up inset of your cursor or keyboard area in relation to the phone's display. You can enable these features by turning on the TalkBack and Your Phone Companion services on your Android device and starting up Narrator and Magnifier on your PC.

The Your Phone PC app also has a new language icon at the top of the Phone screen interface. This toggle controls the language you're typing with your PC-connected keyboard — it should not affect your default keyboard preference or languages when you're using your phone. 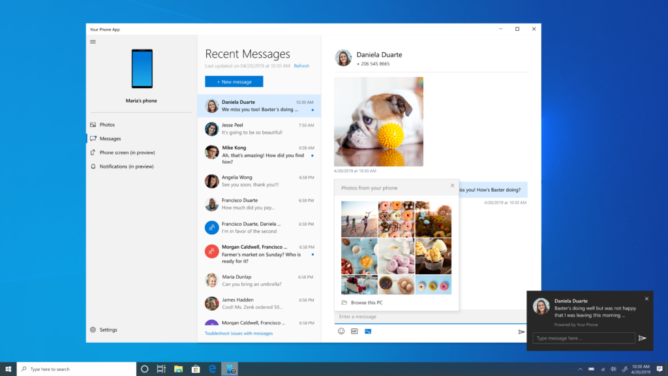 If you've connected up your SMS/MMS messaging with Your Phone, the PC app's interface has been updated. You now have instant access to GIFs and emoji with new buttons and can finally see thumbnails of your contacts along with new unread messages flags. If you receive a text, you're able to reply in-line through the notification served by your PC.

Finally, we've got a mulligan: Microsoft announced last week that phones could now sync with PCs through their mobile data connections. That change was tossed in at the end of this casual changelog for build 18908, though we should clarify that most any Your Phone user can now sync up their pictures, messages, and notifications with the help of their cell plan.

The source link has more details on other changes. You can get the Your Phone app from the Windows Store and the Your Phone Companion app from APK Mirror or the Play Store.