If eight or ten-inch smart displays are too big for you and the Echo Spot is a little too small, you weren't left with much choice until very recently. Thankfully, Lenovo unveiled its 4" smart clock back in January, but Amazon just launched a new rival that might be more seducing.

The Echo Show 5 is an Alexa-powered smart display with a slightly larger screen compared to its competitor. Most importantly it beats it thanks to its built-in camera, that will let you place video calls directly from the device. That being said, the 1MP sensor might be too limited for a good image quality. For added intimacy, the device also has a camera shutter to physically prevent it from seeing what should remain private. Also, just like the larger Echo Show, the smaller one has dedicated buttons to turn the microphone and camera off. 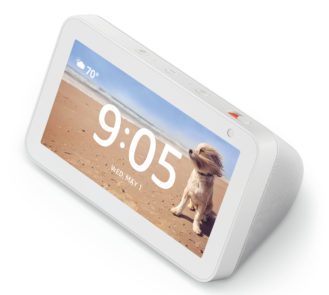 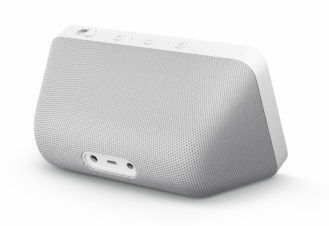 In terms of connectivity, the Echo Show 5 comes with built-in dual-band Wi-Fi 802.11a/b/g/n/ac, a 3.5mm audio output, and Bluetooth. It also has a full-range 1.65” speaker and two microphones for reliable interactions with Alexa. To finish, the device is powered by a 64-bit quad-core MediaTek MT 8163 processor.

The Echo Show 5 will be available in charcoal and sandstone for in Australia, Canada, France, Germany, Italy, Japan, New Zealand, Spain, the UK, and the US at the end of June. It will also come to India and Mexico later during the year. The American MSRP will be $89.99, and an additional magnetic stand to you tilt the device will be available for an extra $19.99.

Start setting up your smart home with 26% off Nest Hub, Hello Doorbell, and Google Home Mini ...