We've all had to switch from one app to another to complete a particular task, whether it's opening Google Maps to look up an address you've been texted, scheduling an appointment in your calendar after receiving an email, or even looking up an artist a friend has just told you about. These are simple tasks that AI can identify easily, just like Android already does when long pressing a number or an address. We recently got tipped about the fact that Q would suggest Quick Actions directly in your notifications based on a message's content, and Google has officially confirmed Android Q will automatically recognize context to recommend the next action you're likely to perform after receiving a message, saving you the trouble of switching apps.

The company has integrated Smart Replies with the operating system's notification system, which means they now work with any messaging app, including WhatsApp and Signal, and suggest replies based on context. More importantly, the system can predict your next action based on what you've just received: If your friend texts you an address, you'll be able to open it Maps without even having to read the message.

Although Google hasn't officially confirmed what type of actions the feature supports, we've seen it work with links, which it can either open in your browser or directly in the related app — for instance, it would open a Twitter link in the app instead of the browser. Similarly, receiving a date and time will trigger a Calendar action to save the event.

This new feature will save us some time by letting us bypass the messaging app altogether, and letting us focus on the final action instead. We'll keep you updated once we know which actions Smart Replies can work with.

Some tipsters have reported the feature is now live for them, although our staff still can't see this. We're guessing Google is gradually rolling it out to more users through a server-side activation, which could mean smart replies will become widely available soon. 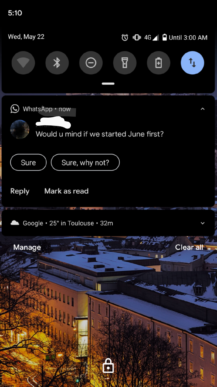 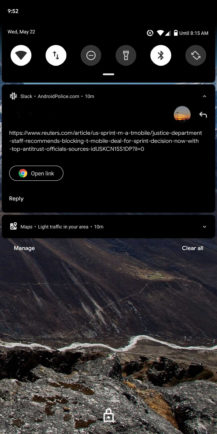