Last year when Synology revealed its new LiveCam app, we knew we had to check it out. The potential convenience of turning an old phone into a remote, battery-augmented security camera was appealing, especially considering the existing power and flexibility of the company's Surveillance Station security camera management system. After months of testing, though, LiveCam makes a better stop-gap than a solution.

I think it's necessary to explain the relationships between Synology's products just a bit before I dive in, since they can be hard to keep straight. Our review is mostly concerned with LiveCam, which is an app by Synology that turns Android and iOS devices into security cameras for Synology's Surveillance Station, which is a security camera software platform and management system that runs on top of the company's NAS hardware, accessible remotely via the DS Cam app.

We used Surveillance Station on Synology's DS218+ NAS, though it should also work on other models.

Most of Synology's software can be pretty complicated — "functional" is the word I'd use. So I was surprised to find that turning an old phone into a security camera with LiveCam is simple, so long as you already have your Synology NAS set up and working. Pairing a phone in LiveCam to Surveillance Station.

I expected a much more complicated setup process, and was pleasantly surprised to discover it took literally just a few minutes to get everything working. There are plenty of additional options in both the Android app and Surveillance Station management portal, and setting up non-phone based cameras is a bit more complicated, but the basic setup process is simple and the provided settings are mostly fine — though you should probably enable HTTPS, which isn't on by default.

There are a few limitations, though. Synology's LiveCam app requires Android 7.0 Nougat or later to work, so there's a cap to the age of the phone you can use as a security camera. That's probably for the best, since the older a device is, the less secure it is likely to be — you are using it as a security camera, after all. Still, for those of us with older devices buried in drawers and nearly forgotten, it would have been nice to repurpose them.

By default, you're also limited to a two-camera maximum in Surveillance Station. You'll have to purchase licenses for additional cameras, which is a bit annoying.

Once Surveillance Station is installed and your phone/LiveCam-based cameras are set up, it's just a matter of configuring how you'd like recordings to be made — most of the settings aren't in the same menus in Surveillance Station as they are for IP cams. LiveCam moves many of those options into the app's settings menu on the phone itself, though some other features like Home Mode scheduling still work and are controlled by Surveillance Station. (In other words, using LiveCam means putting up with some decentralized controls.)

Unlike some security camera systems that can be configured only to record when they detect motion (saving power and bandwidth) it's worth mentioning that Synology's LiveCam is always on. 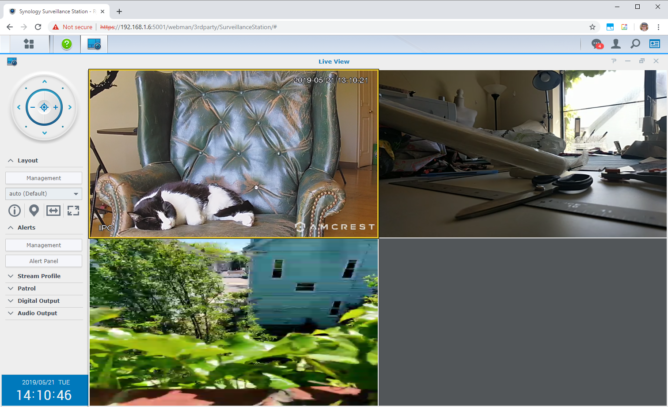 Surveillance Station's live view accessed via a browser (above) and the standalone windows application (below). They work almost identically. 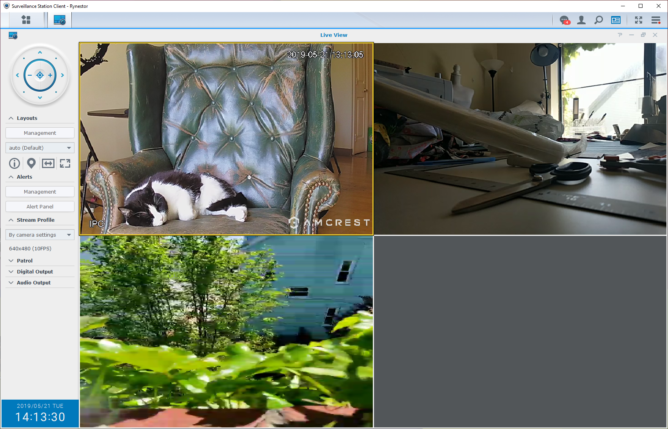 Synology offers multiple ways to access the feed and content recorded by your phone or dedicated security cameras. There's an Android app called DS Cam, a network web client accessible via the DiskStation Manager (your NAS' web-based control center thing), and the Surveillance Station Client for Mac and Windows. If you need it (and can afford it), there is also a standalone piece of hardware called the VisualStation that can provide access and management for your feed without all the tedium of a full computer.

The only major annoyance I had monitoring feeds was camera rotation: in the web management portal and standalone Surveillance Station client, recordings will only play back in the aspect ratio the window's dimensions are expanded to, and Live View stretches and distorts images to be horizontal to fit the multi-feed layout. The DS Cam Android app, though, has no issue with portrait vs. landscape camera orientation.

When it comes to extra "smart" security features, this setup is a bit lacking compared to the many AI-equipped cameras out there. You can set alerts for motion detection, but it doesn't have anything as advanced as the "person detection" features you get on some other paid security services or cloud backups — though you can shoehorn your own solution for remote storage if you need to. However, you aren't paying a monthly fee for those sorts of extras, possibly saving you money if you don't need them. Self-hosted camera solutions like this also have fewer points of failure when it comes to security, and you're in control with full ownership of your data every step of the way. (Keep in mind, should you fail to maintain that system, you're also the only thing keeping it secure.)

Sadly, that's one of the last positive things I have to say.

For the LiveCam app to work correctly on your phone, you will need to keep your device powered on — the app will keep it awake for you by default, but you can't turn the display off without running into issues. That means keeping what will probably be a mostly static image on your display 24/7, which can damage OLED-based screens. If you do turn the display off, the app may continue working, but not in the long-term. On some of my devices it could stay running for hours, on others it disconnected within minutes, and that likely has more to do with how your device's OEM implemented power-saving features in Android than anything else (though I still had issues on every device I tested with the app set to be exempt from Doze). 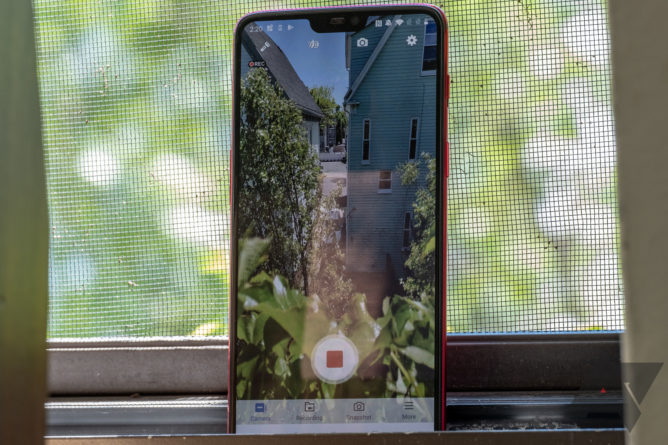 At most, you can expect an hour or two of use tossing a phone in a window, so filling gaps in coverage without power isn't possible long-term.

While being used as a security camera, your phone will also suck down a lot of power, so barring very short-term use, you'll need to keep it plugged in or deal with a security camera that has only a couple hours of battery life. Temporarily plugging a gap in camera coverage via LiveCam by tossing a phone in a high spot or corner isn't too feasible.

Throughout this review, I also ran into some other unfortunate problems. The LiveCam app initially crashed repeatedly on my Pixel 3, though whatever issue plagued it resolved over the (long) period of testing. Universally, feeds using the LiveCam app also fell behind real time unless I had camera settings set near the minimum. Resolutions above 640x480 or high frame rates would result in a feed that would slowly fall far behind reality, which is pretty unreliable in a security camera. If you were watching the live feed in Surveillance Station from that phone, and you were to see anything suspicious, by then it would possibly be too late to check it out.

Although we're primarily concerned with LiveCam's performance, I should note that Surveillance Station works much better with generic IP cameras, but even then you need to be careful if you start trying to do anything more advanced than basic recording. There are a lot of little ways to break things in the multitudes of software settings if you aren't careful when tweaking the defaults. For example, if you rename the folder in which recordings are stored, you have to remember to change that name in any locations where other tools are accessing it, or in services that are saving to it. Basically, Synology keeps settings on full manual, so changes don't often propagate as you'd expect, and not all of the settings or their locations are obvious.

The typical warning for extensive customization applies: Things will probably break if you don't take the time to understand what you're doing. And even if you do, you'll probably break something anyway, so expect to spend time fixing things.

No, I wouldn't buy a Synology NAS purely to use the LiveCam app. In my opinion, the security camera functionality provided by the LiveCam app is, at best, a short-term supplement to dedicated security cameras. The draw of being able to repurpose an older phone as a camera in a security system was my main interest, and with many of us having older devices gathering dust at home, it sounded like a productive way to recycle old tech. But I don't think it works well enough to be worth picking up a compatible Synology product by itself — they start around $200, and that's without any storage.

However, if you already have a Synology NAS, then the LiveCam app is definitely worth a try. 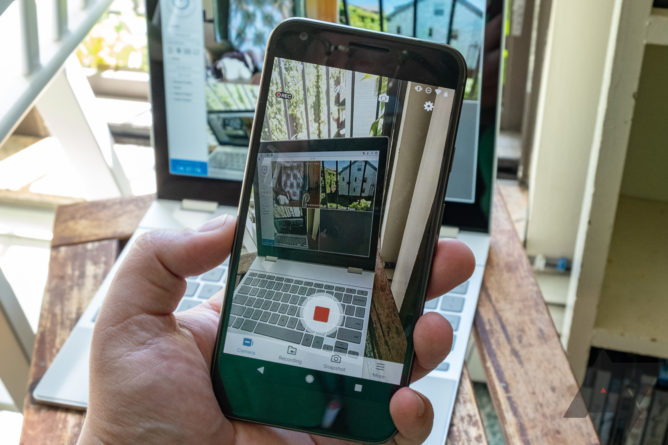 If you do dive in, remember that using Surveillance Station can get expensive fast. Camera licenses — which are required if you have more than two cameras in your security setup — cost a lot, starting over $50 for one, and that's on top of whatever you pay for the camera. A full set of licenses for a good sized home could cost upwards of $300, and you also need to pay for every phone you turn into a camera via LiveCam, too. Add in the cost of the NAS and disks, and you could easily break a thousand dollars building out a Synology-based camera system, even just using phones you already have.

Still, for power users that aren't comfortable with home security solutions that stream and store feeds off network, Synology's Surveillance Station is a powerful solution that keeps you in control. It's just too bad that LiveCam's ability to turn an Android phone into another security camera wasn't as flexible as I'd hoped. But, if you mix in the benefits from all of Synology's other services, it might become the perk that convinces you to pick up a NAS.

Our focus here was on LiveCam, but it's necessary for me to say that I barely scratched the surface when it comes to the overall Surveillance Station functionality in this review. It supports very complex configurations including up to 100 cameras per NVR/NAS, with a plethora of external management solutions. While I looked at it through the lens of LiveCam from a general consumer perspective, Surveillance Station is tremendously robust and complex. It can scale easily far beyond consumer purposes, well into business and corporate use — and really, that's its primary purpose. 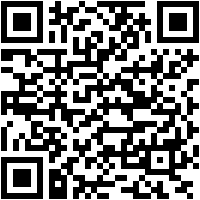