When OnePlus announced its latest flagship phone, there were some interesting software features introduced alongside the impressive new hardware. Not all of them will be coming to older OnePlus devices but many of them will, including Zen Mode and the native screen recording function.

In a OnePlus 7 Series AMA on the company's forum, the following comment was posted by a representative: "Non-hardware dependent features of OxygenOS will be available on OnePlus 6 and 6T soon." While not specific, it means it's likely that most of the new software enhancements from the 7 Pro will be coming to at least the 6 and 6T, unless there's a hardware-based limitation.

One example has been given of feature that won't filtering down to the 6T and below, and that's Nightscape 2.0. The low-light photography mode requires the camera setup present in the 7 and 7 Pro, unfortunately. Another key feature unveiled at the recent OnePlus event was Zen Mode, which encourages (or rather forces) you to step away from your digital life for a moment or two. This one will be coming to older phones, according to a statement given to Android Authority.

In the case of the native screen recorder, the 6 and 6T will be getting it and so will the 5 and 5T, according to an answer from the AMA. The feature will arrive in an upcoming Open Beta before being rolled out in stable firmware, so keep an eye out. I think it's safe to assume the same will apply to the new screenshot editor from Oxygen OS 9.5, too, since this is obviously not hardware-dependent.

Fnatic mode is intended to improve gaming performance on the OnePlus 7 and 7 Pro, but we've not found an official word on whether it will be coming to older models. There is apparently a similar-sounding feature already in the 6/6T Open Beta called 'eSport Game Mode' which may well be the same thing but without the Fnatic branding — perhaps that will change in a future update.

OnePlus forum post confirms the new features that will come to 5/5T/6/6T, all of which will get Android Q 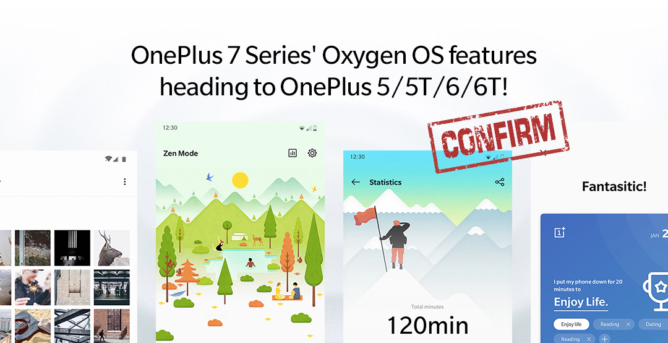 Since some of the new OnePlus 7 series features have proved to be very popular, OnePlus has seen fit to add a post to the forum outlining exactly which ones will be coming to older models, confirming what we had figured out already above.

In the post, Global Product Operations Manager Manu J. promised that Fnatic Mode, Zen Mode, and Screen Recorder will come to the OnePlus 5, 5T, 6, and 6T. Other features that will be heading to those older models include Quick Reply in Landscape, DC Screen Dimming, and RAM Boost.

Another interesting tidbit is that Manu J. confirmed that Android Q will definitely be coming to the OnePlus 5 and 5T. The Android Q Beta is already available on the 7 Pro, 6, and 6T. There's no date set for when the 5 and 5T will get Q, but it's good to know it's coming at some point down the road.