OnePlus was quick to market its latest 7 Pro as having substantial photography improvements — it even danced around a National Geographic photographer at its launch event to talk about the cameras — but it turns out that some of the numbers tossed around in spec sheets while discussing the phone weren't quite right. That 3x telephoto lens included in the trifecta of cameras isn't actually providing a "3x optical zoom." In fact, it's closer to 2.2x, and it makes up for the difference by cropping. 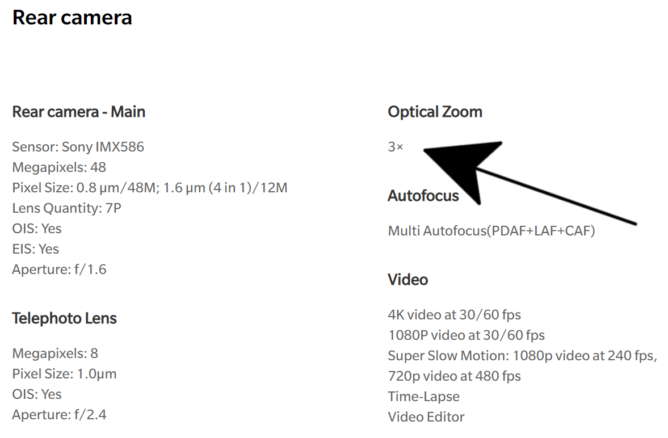 Technically incorrect (the best kind). From the OnePlus 7 Pro specifications on OnePlus' site.

Both modes use the same lens and sensor, but somehow the image produced in Portrait mode is of a wider angle and at a higher resolution — 13MP in Portrait mode compared to 8MP in 3x "zoom" mode. So, in fact, the telephoto lens has a higher 13MP resolution, and it's actually cropping down to hit that 3x zoom target.

Based on the math which describes the geometry of the situation, that crop places the actual optics of the telephoto lens around 2.2x rather than 3x (or 57mm instead of 78mm, in focal length and 35mm-equivalent terms).

What does this mean?

Update: The following section, it has come to our attention, is not actually correct. We're leaving it up for posterity, but please see the update at the bottom of the post explaining what happened here.

On the surface, the fact that it's reaching the 3x "zoom" field of view via a crop might not seem too bad. It's not like OnePlus is using your typical "digital zoom" where the image ends up being heavily processed and stretched to hit a higher megapixel rating. This is still effectively native, it's just cropping out the edges, sacrificing a bit of that potential 13MP maximum resolution down to 8MP to hit its target field of view. But, there's more to the optics and their resulting photos. A higher "optical zoom" means a higher focal length, which also means different perspective distortion in a scene for the same distance — and you don't get the full "3x" OnePlus claims.

(The discussion is about to get technical, but we have a few photos that should make the subject easier to follow for non-shutterbugs.)

The effective difference between 2.2x and 3x "zoom" in 35mm-equivalent focal length for the sensor (i.e., what you'd see in a DSLR or mirrorless camera's numbers) has been calculated at ~57mm (2.2x) vs. the ~78mm (3x) focal length advertised. A 21mm difference might sound small as a number in isolation, but it's noticeable when it comes to photography. Things like the shape of a face or the relative angles of items in scene change quickly at lower focal lengths for the same distance, and this is enough to make a visible difference. OnePlus 7 Pro customers aren't quite getting what they were told they would with "3x optical zoom." 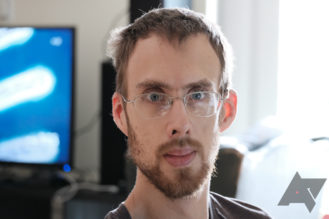 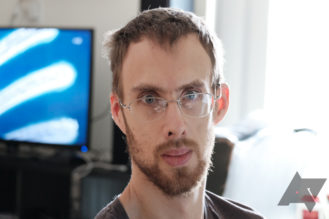 Focal length and "optical zoom" aren't just about the given field of view. Even if you crop them down to precisely the same angular view, if they are at the same distance from the subject, they will produce a different photograph with a different perspective. I like to think of the scene as composed of a bunch of lines pointed at the camera that, based on distance and focal length, grow more parallel, leading to the perspective distortion that results in wider faces, more visible ears, and tighter backgrounds, visible in the two examples above. (Thank my roommate for his saintly patience.)

Part of this argument comes down to your distance from the subject, the geometry which results in those changes in perspective change the further back you are, and you can get the same results with a lower focal length and a crop by simply being further back, but in a fixed position and at a fixed distance, you get different results based on that focal length.

This difference in focal length can't just be brought back on crop, either. It's a property of the optics being used at that distance, so cutting down the image won't restore a higher focal length unless your distance changes, even if it can narrow the FoV slightly. (If you're familiar, think of crop factor when it comes to camera sensor types like APS-C or 4/3. A 50mm lens might crop down to 75mm, but you're still getting 50mm perspective at the same distance.)

OnePlus 5 all over again

Sadly, this isn't the first time that OnePlus has exaggerated the rated "zoom" on its cameras. The OnePlus 5 was marketed as having a 2x zoom, though only 1.6x of that was optical, the rest was via "SmartCapture," which is bad marketing speak for your more typical digital zoom. This time, though, OnePlus was quite clear that this was 3x optical zoom, even though that doesn't appear to be true.

Carl, how well does this answer apply to https://t.co/w7EVAy0cuu?

Specifically, @oneplus claimed 3x optical this time, but in reality, it's ~2.2x optical. If the remaining 0.8x is SmartCapture, why the 3x optical zoom claim? pic.twitter.com/NPiKjSxE2t

We've reached out to OnePlus for a statement as well as verification of the telephoto camera's specifications, but neither was forthcoming at the time of publication.

In the meantime, this discovery likely won't make a difference to the vast majority of 7 Pro owners. You get the full 8MP which OnePlus advertised, and it's technically "3x zoom," it's just not all optical, as OnePlus's site, specs, and marketing claim. But really, this discussion of focal length differences will go right over most heads. After all, OnePlus doesn't even market the optics in 35mm-equivalent focal lengths. However, any photography enthusiasts interested in picking up the OnePlus 7 Pro should keep in mind that they won't get the full ~78mm focal length that was seemingly advertised via the "3x optical" telephoto camera.

OnePlus provided us with the following statement regarding both the telephoto camera specifications and its zoom capabilities:

OnePlus states that the crop being applied results in no loss of detail, as you might see from digital zoom solutions like that used by the OnePlus 5. Customers are still getting the full 8MP claimed, but not all of the zoom effect is optical, as was claimed on Reddit.

It's come to our attention that there are a lot of misconceptions out there about how focal length optics work in photography, and unfortunately it appears we were operating under one of those misconceptions. In short, "cropping" an image to produce an effective amount of "zoom" should produce an image that has optical characteristics identical to those of an image shot at an equivalent "true" zoom using lens optics alone. So, the OnePlus 7 Pro's 3x crop-zoom images should look like images from a "true" 3x optical system - OnePlus is just sacrificing camera resolution to get there. We're sorry for advancing that misconception and we regret the error. We spoke to multiple people - including in off the record conversations - that led us to believe we were correct, but as we've researched more and continued to look at feedback from readers, it's apparent we're not.

Still, we believe it isn't fair for OnePlus to describe the 7 Pro's camera as a "3x optical" system - which it has, repeatedly, and continues to do. The 7 Pro's camera is a 13MP 2.2x optical system with the ability to crop down to 8MP to create an effective 3x zoom factor, which at best could be described as a sort of "hybrid" zoom technique. David Ruddock, Managing Editor.