T-Mobile is rebranding its service plan offerings away from T-Mobile ONE to Magenta. Starting from June 2, those who sign onto a new basic plan will get a mobile hotspot boost while existing customers will have to endure major shifts to the Netflix on Us program. The self-titled "Un-carrier" is also trying to round up switchers onto the new plan by letting them carry over whatever service rate discounts they have.

The basic Magenta plan is very much like T-Mobile ONE: Individuals shell out $70 per month on autopay for unlimited talk, text, and LTE-speed data plus free international texting and 2G data — in Canada and Mexico, roamers get 5GB of LTE data and talk time as well. Streaming video is limited to 480p resolution and overall throughput may be throttled after 50GB of use in a month. Other perks include a free hour of in-flight Wi-Fi on domestic planes with Gogo service and sweepstakes opportunities and gifts from T-Mobile Tuesdays.

One positive change with Magenta is that it offers 3GB of mobile hotspot through LTE in addition to the unlimited 3G-speed tethering already on T-Mobile ONE. But here's where things get tricky: T-Mobile is still offering Netflix on Us for all of its T-Mobile ONE and Magenta plan holders with at least two lines, but has decided to make adjustments in alignment with the price hikes on the movie streaming service made in January. 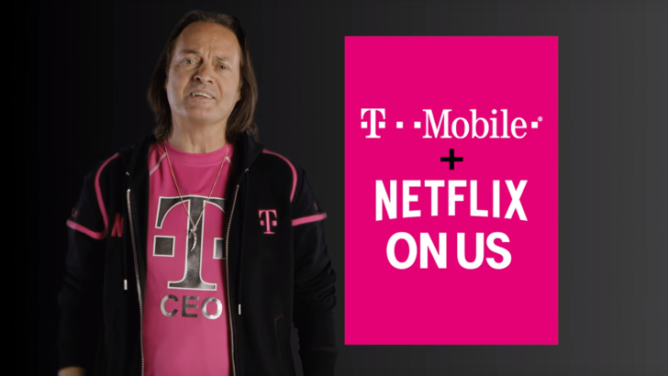 Magenta customers will only be able to get on a free Netflix Basic plan, which allows for SD-quality streams on one screen at a time — conditions that are not at all ideal considering the two-line requirement. T-Mobile ONE customers have the options to switch over to Magenta for the free Basic plan, opt out of Netflix on Us, or, starting from July 5, pay an extra $2 per month to keep their Netflix Standard subscription with simultaneous streaming on two screens at up to HD resolution.

The company will begin selling Magenta plans from June 2. The $15 per month ONE Plus add-on, which increases roaming speeds and the LTE Mobile Hotspot cache among other benefits, will continue to exist as Magenta Plus.

The company is taking the opportunity to pull away subscribers from AT&T, Sprint, and Verizon by offering them matching on their corporate, affiliate, military, or senior rate plan discounts. Switchers can bring over their latest bill and get up to a $15 discount on one line of Magenta, or up to $30 for two or more lines — T-Mobile will round up to the next $5 increment. This limited-time offer also starts on June 2.

Finally, the carrier is offering a $300 rebate over 24 months of bill credits on a Galaxy S10e, S10, or S10+ purchase for any customer who trades in a qualifying phone (see terms here). Customers can also get up to $900 off a second S10 series device with the purchase of a second line, again, through bill credits.

A couple of additional notes on the changes that we've been able to sort out: