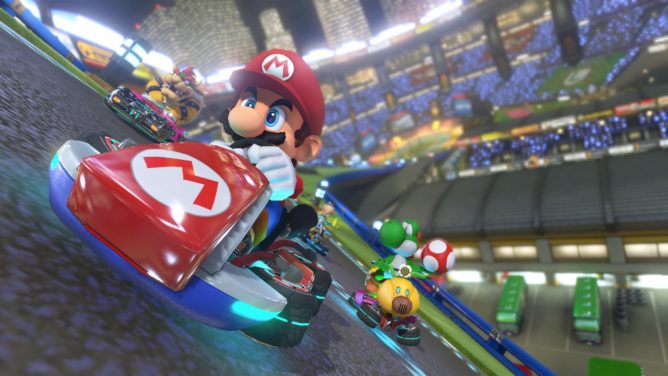 First and foremost I'd like to mention that Nintendo has forbidden the sharing of screenshots and videos during the closed beta test of Mario Kart Tour, so I won't be able to include any visual content in this article. However, Nintendo did not forbid describing the beta, so that's precisely what I'm going to do.

There is no question about it, Mario Kart Tour is indeed a gacha game through and through. There are two types of currency included in the beta, and of course one of them is used for purchasing loot boxes as well as stamina. The included stamina system will indeed limit how much you can race in one sitting, that is unless you own enough of the secondary currency to use as payment to continue. Oh, and those loot boxes I mentioned, well, they're multi-layered, which means karts, drivers, and gliders are all randomly unlocked through the gacha system. And if all of this wasn't bad enough, there are rare drivers available that give players an advantage when racing, which means the game is pay-to-win. Funny how the forbidden screenshots and videos make a lot more sense in light of these details.

Only a few months ago there were reports that Nintendo was encouraging its mobile partners to limit the very monetization systems I've detailed above, and yet just yesterday I reported that Nintendo had recently decided to pull two of its loot-box-infested mobile games from Belgium, which made me question the company's actual commitment to fairly monetized games. With the release of the closed beta of Mario Kart Tour, it seems clear Nintendo is perfectly fine with using the worst systems available to earn a quick buck. So yeah, somehow I doubt Mario Kart Tour will be available in Belgium anytime soon.

Now, this is not to say that the gameplay is bad as it's actually quite the opposite despite the intertwining of egregious free-to-play elements. When you are racing, Mario Kart Tour feels good to control, and it also looks great in motion. You will have to play in portrait mode, and the graphics may not stack up to the quality of Mario Kart 8, but for a mobile game, they are plenty good enough. The single finger touch controls may take some getting used to, but within the first few races, you should feel confident enough to tackle the majority of content. Mainly you'll hold your thumb on the screen to turn by slowly sliding it around as though you were controlling a single physical thumbstick. When you take your thumb off the screen, you will continue to race in a straight line, and if you prefer gyro controls, they are available in the settings. To advance in the game you will have to unlock stars by completing races. The more stars you earn, the more courses you can unlock. It's a fairly basic setup when it comes to a Mario Kart title, but at the very least the racing feels solid and offers a good bit of fun.

More or less I am at odds with the closed beta of Mario Kart Tour. The racing feels fluid and familiar despite the portrait single-finger controls, and even I'm willing to admit that I had a blast when barrelling down a track, but seeing that there's a stamina system that will halt my progress if I really want to dig in, I don't feel enthusiastic about continuing. Plus, once you couple this issue with the ridiculous loot box system for racers, karts, and gliders, the larger picture becomes crystal clear. Mario Kart Tour is a cash grab that utilizes gambling mechanics to keep players hooked, and when considering that this is a game rated E for everyone, I can't say I endorse such a product. While this is a closed beta release that may potentially change in the future, I doubt the integral FTP systems will be removed from the game anytime soon. I genuinely hope Nintendo proves me wrong.

Huawei is already looking for a Play Store replacement, talking to Aptoide