Samsung released three versions of the Galaxy S10 earlier this year, but the "best" model wasn't available until now. The Galaxy S10 5G has officially launched in the US as a (temporary) Verizon exclusive. Samsung pitches the S10 5G as the most desirable member of the S10 family regardless of your access to 5G, but it comes with an inflated price of $1,300. Reinforcing this, Verizon is willing to sell the new S10 variant to anyone, even if you don't live near a 5G market.

I had the chance to test the Galaxy S10 5G in a 5G market. It does offer a ton of features, all GS10 phones do. The addition of 5G is the most crucial difference, and that's as much a hindrance as it is a benefit right now.

If you've used a Galaxy S10+, the S10 5G won't seem like a totally alien device. It's an S10+ on steroids: the screen is larger at 6.7-inches, and the battery has increased by a similar margin to 4,500mAh. The larger footprint makes the S10 5G one of the largest phones on the market even with those slim bezels. It's a real handful—literally—but I didn't drop it in the several hours I was able to carry the phone around Minneapolis (one of Verizon's 5G markets). However, I feel like it's at the very edge of what I can reasonably use as a phone. 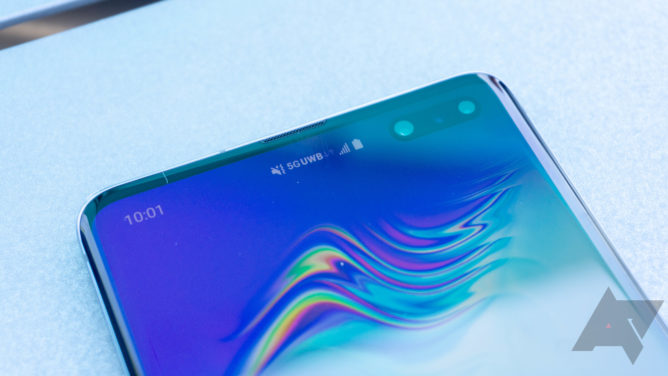 Other than the inflated size, the most obvious change to the S10 5G is the addition of a new camera on both the front and back. On the back, you still get the regular, telephoto, and wide-angle cameras, but there's now a time-of-flight (TOF) sensor. On the front, the 8MP depth-sensing camera has been replaced by another TOF camera, which makes the hole-punch a bit larger. With the TOF sensors, the phone can accurately map distances, allowing Samsung to implement more accurate portrait mode and other effects. And I say "more accurately" as a comparison with the Galaxy S10+. The S10 5G is better, but it's still easy to fool the edge mapping.

The TOF cameras could be useful for a lot of things, not least of which is true 3D face unlock. Of course, the phone doesn't know how to do anything useful with the TOF cameras right now. It feels like Samsung just needed some way to differentiate this phone from the Galaxy S10+, so it crammed in a few new sensors. The experience is otherwise what you'd expect from the Galaxy S10e, S10, and S10+. It's a fast phone, but not quite as smooth as the Pixel or the OnePlus 7 Pro. The 8GB of RAM is more than enough to keep apps in memory, though. The ultrasonic in-display fingerprint sensor works, but it's slower than other unlock methods.

In addition to the Snapdragon 855, the GS10 5G has a linked Qualcomm X50 5G modem. That's the entire reason for this phone to exist, and I got a chance to take that for a spin, too.

I again tested Verizon 5G in Minneapolis, but this time I got to use the Galaxy S10 5G instead of the Moto Mod. I think this test is more representative of the experience early adopters will have. People who want 5G will end up buying a 5G phone rather than a Mod. Although, I feel like the mod might be a better experience right now. The Moto Mod is basically a cluster of antennas that sticks to the back of your 4G phone. One of them even peeks up above the top in a vestigial antenna. The Galaxy S10 5G has 5G antennas inside the chassis, and it seemed much more finicky with 5G signals than the Moto Mod. 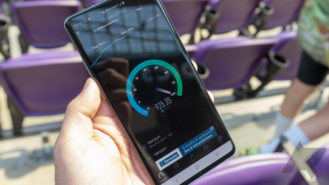 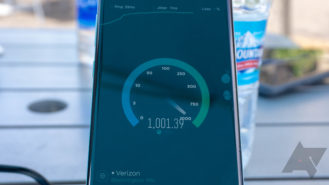 Verizon's network is still based on high-frequency millimeter wave signals in the 28GHz range. Since my last test, Verizon has added more 5G nodes and increased backhaul. And indeed, I saw some impressive speeds. On several occasions, I reached more than 1Gbps on 5G. Passing out of line-of-sight with the 5G node caused the phone to drop back down to 4G, but that's what you'd expect with millimeter wave. There were times, however, when I was standing right underneath a 5G node, and the phone refused to connect to 5G, instead offering a 4G LTE connection. That was... odd. Samsung suggested the phone might have been too warm—this apparently causes the phone to shut off the 5G radio. 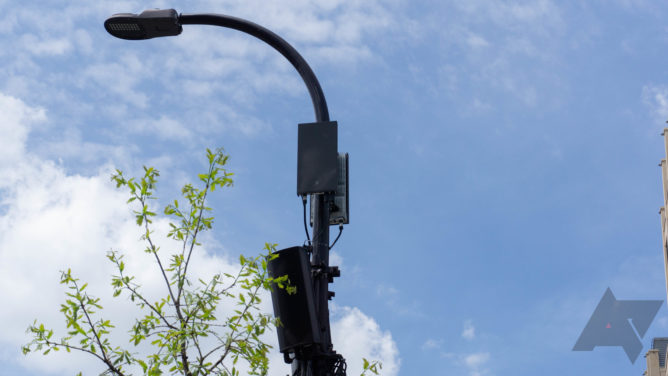 A Verizon 5G node in Minneapolis

I had a chance to try an indoor 5G network in the US Bank Stadium in Minneapolis as well. This was particularly informative because the 5G connection was very solid in the lower levels, but it was non-existent in seats covered by the concrete base of the upper bowl (no line-of-sight to the antennas). I also encountered a Verizon engineer fiddling with the 5G nodes. I mentioned that my 5G connection has just died, and he said he'd rebooted one of the cell sites. If I just stepped over to the other side of the light pole, he explained, I'd find the other antenna still working. It's all about line-of-sight.

An impressive phone that's not worth buying

Right now, 5G is a parlor trick. When you happen to have a proper connection to Verizon's 5G network, the results can be incredible. With gigabit speeds, I was able to download an entire season of TV in the Netflix app in the time it would have taken my 4G phone to grab one or two episodes. The Play Store isn't fully optimized for 5G speeds, but app downloads and updates there still seemed very snappy. 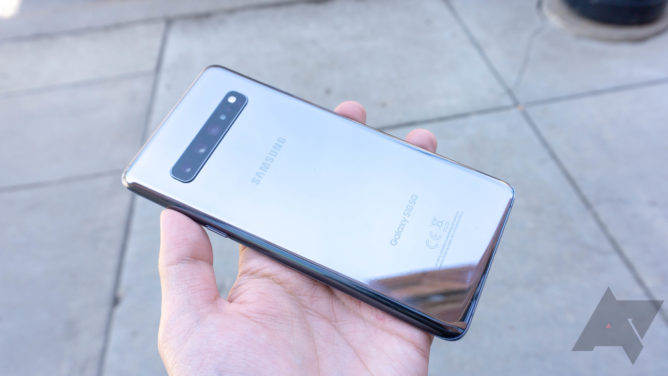 Put simply, 5G is cool to play with but not worth paying a premium to have. That goes for the service and the hardware. A $1,300 Galaxy S10 is a poor value. Verizon has at least pushed back plans to begin charging $10 per month for 5G data. While the company still calls the free 5G a "limited time offer," there's no timeline for adding the fee.

I remain convinced that 5G has great potential, but it's a long way from consumer viability. The Galaxy S10 5G doesn't seem to work as well as the Moto Mod with its mass of antennas, and most consumers will expect their 5G phone to be fully integrated. While millimeter wave can be blazing fast, it won't replace LTE on its own. We need lower frequency 5G to make this worthwhile, and that's something Verizon isn't willing to talk about yet.