Not a lot has changed with Digital Wellbeing since its official release in November of last year, but we know big things are on the horizon for Google's built-in digital nanny. While the added Parental Controls and per-app grayscale settings aren't live yet, and likely won't be for a few more months, there's one significant addition in the latest Digital Wellbeing update. It's now integrated in the Pixel Launcher and provides an instant pause control for apps.

Pausing apps isn't new, but it was dependent on timers until now: you had to set a daily limit for each app, and if you used it for longer, Digital Wellbeing would pause it until the end of the day. That meant turning the icon greyscale and forbidding you from launching it (unless you went to settings and removed the timer).

The new pausing functionality is on-demand. Without setting up timers per app, you can just tap and hold any icon and look for the sand timer. It will either show up on the top left if the app has launcher shortcuts (leftmost screenshot below) or as its own item in the pop-up if the app doesn't have shortcuts (screenshot at the top of the post). You can also get the pause button in overview (a.k.a recents / app switcher); it appears below the option to pin the app. 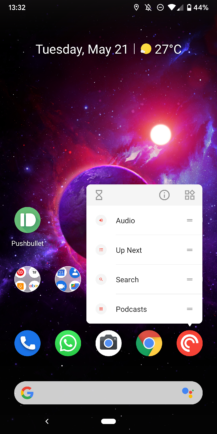 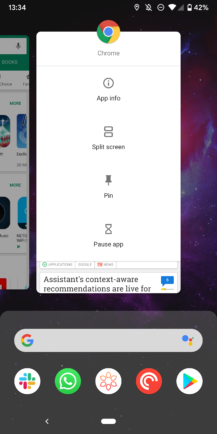 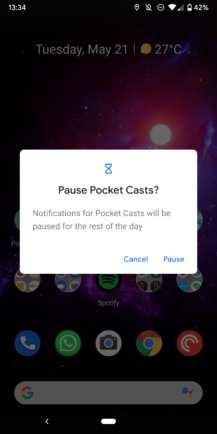 If you choose to pause an app, you get an explanation saying its notifications will be paused for the rest of the day. Then its icon will turn grey and you won't be able to launch it.

The feature seems flaky for now though. Obviously, having the Pixel Launcher (or Launcher 3 on Android One devices) is a requirement. But still, even after updating Digital Wellbeing to 1.0.2483 beta (APK Mirror), I didn't see these pause icons anywhere on my Pixel 2 XL. Then they suddenly appeared around the same time the Google app updated to 9.91.5 beta (APK Mirror) on my phone, which could be related... or not.

When they showed up, I paused Pocket Casts, tried to open it after a few minutes to see what happens, got the warning, tapped on "Learn More," and the app oddly launched, which means it bypassed the time-out. That shouldn't happen. After that, all the pause icons disappeared from the launcher and I can't seem to get them again, even after a reboot.

That is to say the feature doesn't seem properly baked yet and your mileage may vary in terms of how well it works. When it does, it should be another tool in your arsenal of self-control against time-sink apps. Don't want to use Instagram or play PUBG for the day? Pause them. Perhaps that is all the friction you need to tame your instinct to launch those apps and games each time you unlock your phone.

To test this out for yourself, you can grab Digital Wellbeing v1.0.2483 beta from the Play Store or from APK Mirror.

Amazon's Echo Wall Clock drops to $25, still can't do much