The Huawei P30 series made the news in March thanks to impressive camera features. The Chinese company declined its flagship into the regular P30, the Pro, and the Lite versions, but all three weren't easy to buy in the US. Nevertheless, B&H started accepting pre-orders for them about a month ago, and the retailer is already shaving a few bucks off their price. 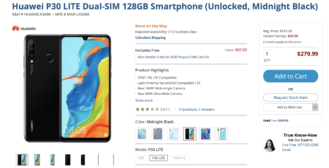 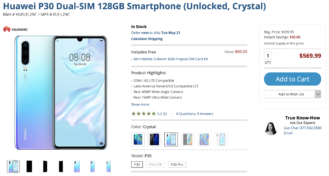 Both devices feature 128GB of internal storage, a dual-SIM tray, and three rear cameras. Of course, the ones on the P30 are more advanced, reaching 40MP for the wide-angle sensor, 16MP on the ultra-wide camera, versus, 24MP and 8MP for the P30 Lite. Similarly, the regular version has an 8 MP depth camera, while the cheaper one only has a 2MP depth sensor. Performance is also different between the two, as the P30 has a much faster octo-core processor. Lastly, the two handsets are GSM variants, which means they should work with AT&T and T-Mobile, but won't be able to connect to Sprint's and Verizon's networks.

B&H is also throwing in a free Mint Mobile 3-Month 8GB Prepaid SIM worth $60 for the purchase of either device, which lets you get a few extra gigs for free thanks to the phones' secondary SIM-trays.

Both phones have received an additional price cut, with the P30 dropping an extra $30, and the P30 Lite getting another $10 off. They're now selling for $540 and $270, respectively, but the Lite variant is currently out of stock with more units on their way.

It's unclear whether Huawei's current issues are behind the new price drop, but it's the company will certainly have a hard time selling devices given the current context.