After Google killed Allo, users lost the ability to get Assistant suggestions directly in their conversation feeds, but the company confirmed it would bring the star feature to Messages soon. Three months later, the integration is finally live, and Google's digital helper now pops up with recommendations based on your discussions.

Instead of being able to talk directly to Assistant through Messages, the new functionality instead works in the background to automatically provide suggestions when it can. For instance, if you're talking about a movie, food, or music, a card prompting you to launch an Assistant query will appear in your feed. 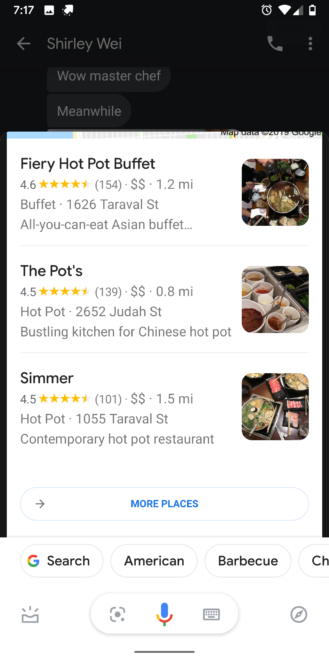 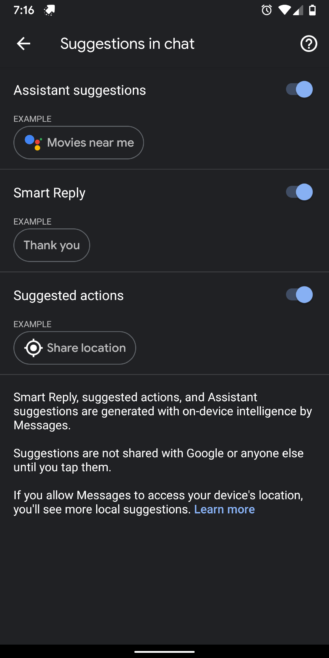 To avoid privacy concerns, the initial processing is done locally on the device without sending data to Google, which means you'll only get access to a search shortcut rather than an actual suggestion. However, tapping that chip will trigger a search through Assistant and display smart recommendations. In case you don't want such prompts to creep into your discussions, the feature can be fully turned off in the app's settings. Lastly, you can still launch Assistant as you usually would by tapping and holding the home button, but you'll now see an extra option to share the suggestions back into your chat.

I'm excited about Google expanding this feature more extensively, especially after Facebook killed its rather handy helper. I'd be even happier if we could see Assistant integrated into WhatsApp, but I don't see that happening anytime soon.

The functionality is available in Messages version 4.4, which you can download from the Play Store or directly from APK Mirror, but also seems to require a server-side activation for it to appear.

Our tipster tells us he's mostly been able to trigger these suggestions for weather, nearby places, movies, and general information — which is understandable. Here are a few more screenshots of the feature in action.