Anker has been producing portable projectors since 2017, when it released the first Nebula Mars. Since then, it has made a sequel to the Mars, and a smaller Nebula Capsule the size of a soda can. While the hardware and build quality were excellent on all of them, the heavily-modified Android software always left a lot to be desired.

Anker's newest model, the Nebula Capsule II, is significant because it's the first portable projector to run full-blown Android TV. No more struggling with a remote to navigate Android apps intended for phones — you get a real TV interface with real TV apps. For that reason alone, the Capsule II is the new portable projector to beat, but it has a few more nice features — as well as a few drawbacks.

While the Android TV-based software is the Capsule II's main attraction, the hardware and design are also improved from the original model. It has the same cylindrical appearance, but with a larger and heavier frame. This does make the Capsule II marginally less portable than the original, but the brighter projection lamp (200 vs. 100 ANSI Lumens) makes up for it. 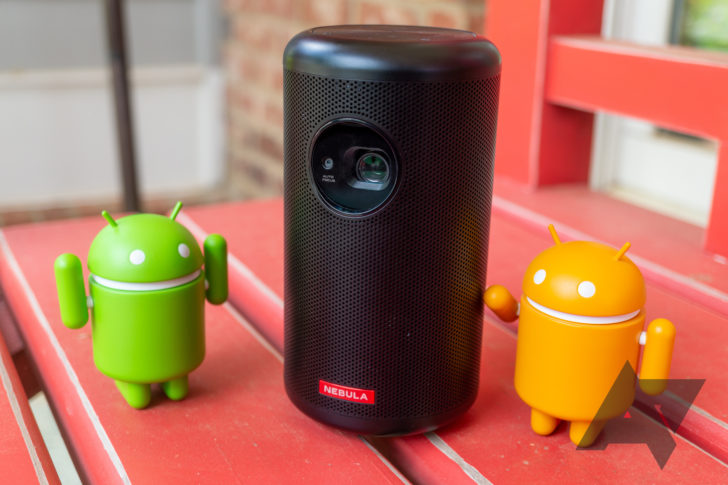 An array of controls can be found on the top of the Capsule, so in case you lose your remote, you can still navigate through apps without any problems. The buttons are capacitive touch, instead of the clicky controls on the original Capsule, but at least they light up.

The back of the projector has two more controls — a power button, and a toggle for Bluetooth mode. Like some of Anker's previous projectors, the Capsule II also doubles as a Bluetooth speaker. 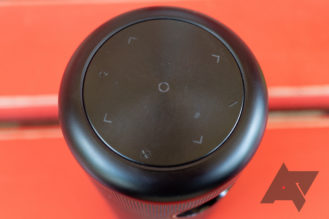 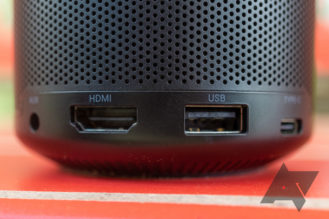 Near the bottom is an impressive array of ports, including a USB Type-C connector for charging, an HDMI input, a full-size USB Type-A port for external drives (or powering HDMI dongles), and a headphone jack.

I'm happy to see Anker ditched microUSB, so now I can use my laptop charger to power up the projector. The original Capsule didn't have a Type-A port, either — connecting a Chromecast required using an OTG adapter, which blocked the projector from charging at the same time. 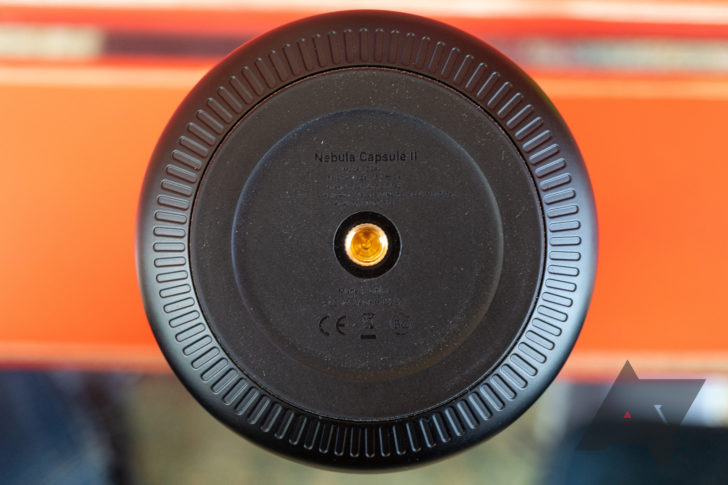 Finally, the bottom of the unit has a rubber base with a tripod screw in the center. As with the previous Capsule, you can easily stick the projector on top of a tripod, which can come in handy.

I know what you're thinking: "Oh my god, is this guy really going to spend three paragraphs talking about a stupid remote?" The answer is yes, but only because there are a few cool features worth pointing out.

First, there's a button for Google Assistant, with a microphone at the top of the remote for listening. Voice commands generally worked very well, and Assistant is just as great on Android TV as it is on smartphones and speakers. 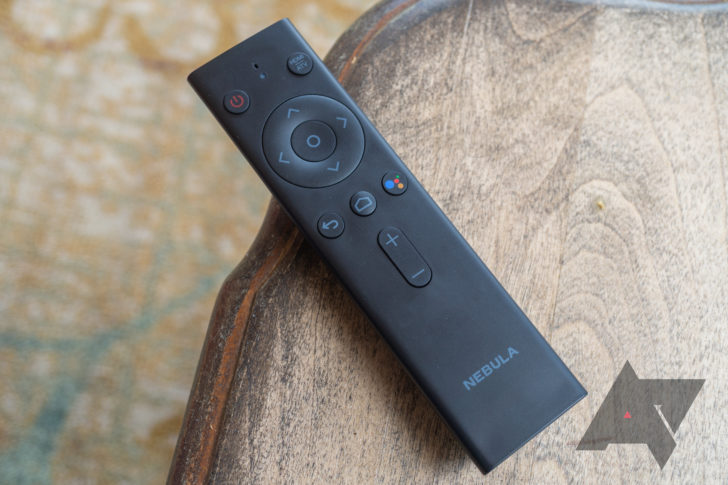 Now that there's no need to use janky phone apps, Anker has replaced the mouse button at the top-right with a toggle for switching between the HDMI input and the internal Android TV system. This is a nice touch, but if you neglect to look at the manual (let's be honest, that's probably most of you), you might not realize that you can force the projector to adjust focus by holding the HDMI button down for a few seconds. The Capsule II auto-focuses, but if you accidentally bump the projector or shift it a few inches, the auto-focus mechanism sometimes doesn't kick in.

Finally, the remote on the Capsule II uses regular AAA batteries, instead of the cell batteries in the original Capsule's remote. If they die, there's probably a better chance that you have spare AAAs somewhere than cell batteries. It's the little things that matter.

The projector is the most important upgrade in the Capsule II. While the resolution is still roughly the same, the brightness has been increased from 100 ANSI Lumens to 200. This is definitely a welcome improvement, as it was sometimes hard to watch movies on the original model, even when in a completely dark room. For reference, most other pico projectors are 100 ANSI Lumens.

In a dark room, the difference between the Capsule I (right) and Capsule II (left) is minimal, but it is more apparent in brighter areas or when watching darker movies.

Another major improvement in the Capsule II that it has auto-focus, instead of a finicky dial on the side of the unit. When you move the projector, the auto-focus should kick in, but it didn't always work reliably for me. As previously mentioned, you can still manually trigger the feature by holding down the HDMI button on the remote. The projector also supports keystone correction, like the previous Capsule.

Anker says the Capsule II should get around 2.5 hours of battery life while playing media, which was accurate in my testing. This is a fairly major step down from the original Capsule's battery life of four hours, but it's still enough for most feature-length movies. If you plan on watching Return of the King or 2001: A Space Odyssey, make sure you have a charger with you.

Anker has been using a heavily-modified build of Android without Google Play Services on its projectors since the original Nebula Mars. While the company did continue to improve the experience in subsequent models, trying to navigate the phone Netflix app with a mouse cursor controlled via a directional pad was never going to be great. The Capsule II is not only Anker's first Android TV projector, but also one of the first Android TV projectors period — the only other one I'm aware of is a $2,000 non-portable Xiaomi model. 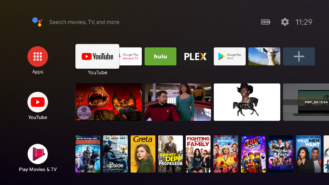 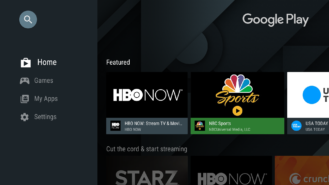 If you've never used Android TV before, there's not much of a learning curve. The home screen is laid out like a TV guide, with content recommendations from the apps you have installed. You can download additional applications (and games) from the Play Store, or you can Cast content from your phone. Google Assistant is also present, and can open apps, give you the weather, control smart home devices, and much more.

The Capsule's internal hardware isn't amazing, but I didn't notice any stuttering or performance issues across the system, except when I tried to play games. 3D games that aren't much of a challenge for most smartphones, like Goat Simulator, struggled to stay at 30FPS on the projector. Simple 2D titles are playable, but don't expect this to match the performance of an Nvidia Shield. 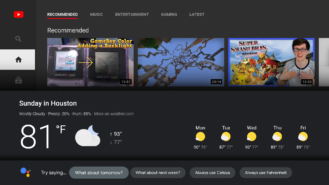 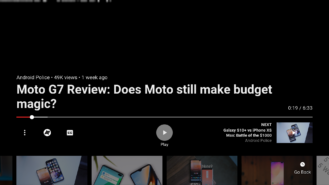 Overall, the software experience on the Capsule II is great, with one exception — you can't download Netflix from the Play Store. You also can't Cast Netflix to the Capsule from another device. Anker told us this was because Netflix only officially certifies devices with a million end points, but you still have a few options. While the Android TV version of Netflix won't work (even when sideloaded), you can grab the latest phone Netflix app from APKMirror, sideload it (HowToGeek has a great guide), and download the Capsule Control app on your phone. 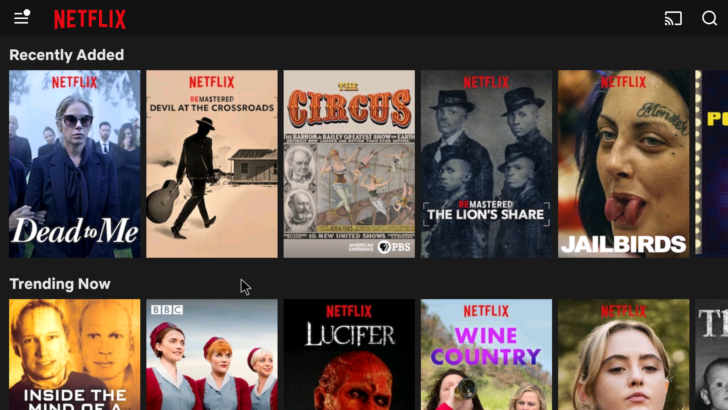 Maybe. The Nebula Capsule II is the best portable projector I've ever used, hands down. While it's not as bright as Anker's own Mars II, it's much more portable, and the Android TV software with Google Assistant and Chromecast support is fantastic. I didn't feel the need to plug in a Chromecast, install the Amazon Appstore, or sideload a usable YouTube app — all of which I did on Anker's previous projectors. 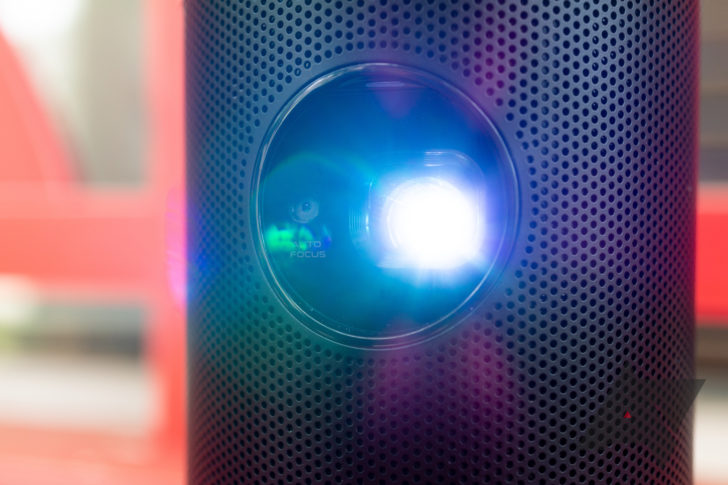 However, all that functionality and polish come at a price: $579.99, to be exact. I have no doubt the Capsule II will go on sale in a few months, just as all of Anker's previous projectors eventually did, but I don't expect it to drop below $400 anytime soon. That's a lot of money for a portable projector, even if it is miles ahead of anything else on the market.

If you go camping or traveling frequently, I don't think you'll be disappointed with the Capsule II. 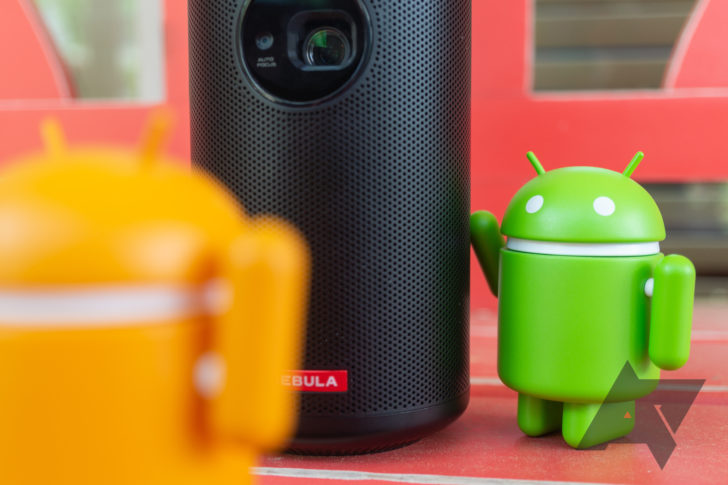 The Capsule II just went on sale on Amazon. When you buy it from the link below, enter code CAPSULE2 at checkout to drop the price by $50.

Android Q Bluetooth settings and notifications will focus on battery levels, Find My ...