I am weirdly zealous about separating my work life from my personal life. My sanity, such as it is, depends upon not having anxieties about my job bleed into my home life, and keeping the chaos and distractions of my personal, family, and creative life from disrupting my work time. After over a decade of almost exclusively working from home, I’ve put a lot of thought and effort into how I can configure the various components of my Google-powered digital life in a way that is efficient and deliberate rather than stressful and schizophrenic.

But as more aspects of our lives become enveloped by the technological, the easier it is for the demands of our jobs to shove their way into our hours off the clock. And if you are deeply enmeshed in a particular digital ecosystem, be it Google’s, Apple’s, or Microsoft’s, there’s very little to separate church from state, as it were. And that has a real psychological impact, at least if you’re already a little bit crazy like me.

Google, particularly Chrome and Android, is central to all of the venues of my life. I use Gmail for personal email and for work. I use Google Docs for the massive amount of writing I do for my job, and I use Docs to write on my own time as well. I use Chrome on my Mac for almost everything, I use a Chromebook for my laptop, and of course, an Android phone, and on each device, labor and leisure are mushed together in a miasma of Material Design.

Oh, let’s not forget that I also use all these same tools for my side-hustle, writing for Android Police. Which I’m doing right now. On a Chromebook. In Google Docs. Just like always.

Now, if you work in an office environment, you have the benefit of a change in location when you go home for the day, but because we are always connected through our devices, you can still hear the whispers of work in the back of your head, pestering you to see if anything requires your attention. Office dwellers may also sometimes work from home, but they might only do so from devices assigned to them by their employer, a “work computer” or a “work phone.”

But if you work exclusively from home, like I do, there is no helpful change of scenery to be had (save for the occasional jaunts to coffee shops and laundromats). My office looks exactly like my apartment because it is my apartment. For most of us telecommuters, our work stuff is our personal stuff and our personal stuff is our work stuff. It can feel like you never really “leave” work, or that your job is constantly wedged into your personal life.

While it can feel somewhat angst-inducing to have so much of my life take place within the same rotating set of Google-powered rectangles, Google itself isn’t the reason for the problem. In fact, as far as Google is concerned, “Paul Fidalgo” really exists as three distinct people. There’s “Personal Paul” or “Home Paul” with his own account; there’s “Work Paul,” who Google treats as a completely different person; and there’s “Android Police Paul” (or, better yet, “Side-Hustle Paul”), the newest member of a trio of individuals who all happen to have the same name and use the same set of devices. 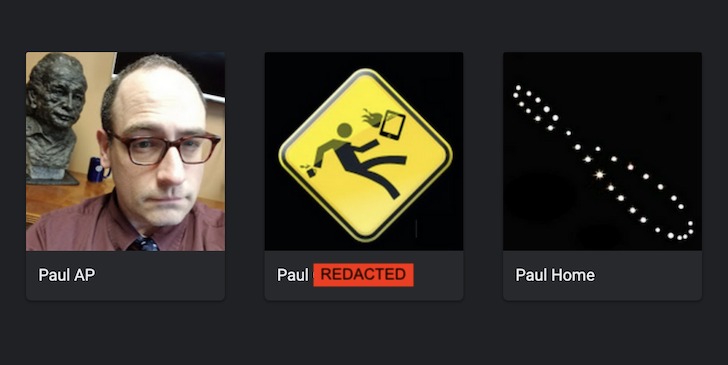 This lack of meshing between personal and work accounts in the Google ecosystem has made some people nuts with frustration, as they would prefer if all the stuff they do within Android, Drive, Docs, and everything else would just meld together seamlessly. For these folks, the idea that “work me” doesn’t automatically have access to the same stuff as “personal me” (or, dare I say it, “MobileMe,” cough cough) is absurd and maddening.

It remains, however, that modern work in the “information economy” (pause for eye-rolling) encourages, and often insists upon, a blurring of the lines between the personal and the professional, so many of us just juggle our various accounts on our various gadgets, regardless of where we are or what time it is.

This is why, for me, Google’s strict partitioning of accounts is a blessing. I don’t want a seamless blending of my digital lives. Bring on the seams, say I!

Jumbled Up in the Smartphone

Probably the device that most resists compartmentalization is the smartphone. Unless you have some specialized jiggery-pokery happening on your device that cordons off work stuff from personal stuff, perhaps installed by your employer, your Android phone is tied to a single account. Additional Google, G Suite, or other platforms' accounts are there, but they’re secondary, along for the ride.

As you could have guessed, I’m not one of those folks who uses the “combined inbox” feature of any mail client, so at least I’m never looking at all my work and personal emails all bunched together. But things like Calendar and Contacts, probably necessarily, display one’s multitude lives in a single view. This is just how it is and the role phones play in our lives right now.

One could use different email apps for different accounts, and I used to do this before Google killed Inbox, which I used for my personal email. But Inbox is no more, and no other client I’ve found feels sufficiently native to the Android experience to be worth the change of habit. Your mileage may vary, and there are a lot of great Android email clients out there.

On my Mac (or when I’ve worked on Windows PCs), I use separate instances of Chrome for each of my Google accounts, and I apply a different color theme to each one. When I have my work Gmail in front of me, my brain instantly knows what it is because of the obvious visual cues. It’s still Gmail, and it still looks like Gmail, but it’s just different enough from my personal and side-hustle Gmails to make things a little less psychologically fraught. 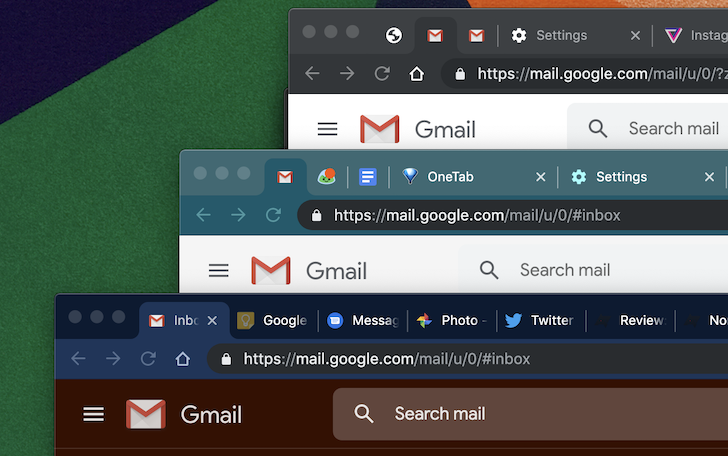 A cascade of Chromes.

I don’t use Mac OS’s native mail client because I don’t hate myself quite that much.

When it’s time to focus on work, I can close or minimize the other Chrome instances and open them again when the time is right. With the Chrome browser being the resource hog that it is, I use extensions like The Great Suspender (which suspends tabs after not being looked at for a certain time) and OneTab (which gathers up all your open tabs into an index of links in a single tab), I have managed to keep too many rainbow beach balls from spinning.

You can always use different browsers altogether for different circumstances, of course, but then you lose the ease of fast and total synchrony among devices also running Chrome under those accounts. I want all those saved passwords, bookmarks, and web histories to keep up with each other, so I choose to stay in Chrome.

Some people swear by the use of multiple desktops or workspaces, shifting between them as needed through keyboard shortcuts or (gack) “hot corners,” but I always found that to be far more fiddly and frustrating to be worth the trouble of assembling. If you have the patience to arrange browser windows among multiple virtual desktops that swoop in and out of view, go for it.

Working from a Chromebook actually forces a significant degree of partitioning between accounts. Though it’s not troublesome to use the keyboard shortcut "Ctrl + Alt + ." to jump to different accounts on my Pixelbook, it’s not the same as just clicking over to a different window or tab. It introduces the slightest touch of beneficial friction so that changing to a different account on a Chromebook becomes a full change of environment. If you’ve also themed these accounts with their own colors and wallpapers, the difference is quite stark. That’s a good thing.

But of course, you’re still on that same Chromebook. That device you use to type away for your cruel taskmasters at work is the same one you use to write your epic poetry that no one will ever truly appreciate. You never really escape the psychological tentacles of work, even if you’re not working.

Glass of Ice Water in Hell: The Tablet

Ready to get really first-worldy? This is where tablets can be godsends.

Yes, even Android tablets. I know. Just hear me out.

For me, tablets have become work-free devices. They are exclusively for personal and creative use, and I no longer add my work accounts to any app or service on my tablet. As opposed to the phone and computers I have to use for work purposes, when I pick up my tablet, it’s only to do the stuff I want to do on my own time. I can’t take a quick second to anxiously check an email from work because it’s not there. On the tablet’s home screen, I emphasize leisure and creative apps like Pocket, Kindle, Netflix, Marvel Unlimited, drawing apps, and a few games. 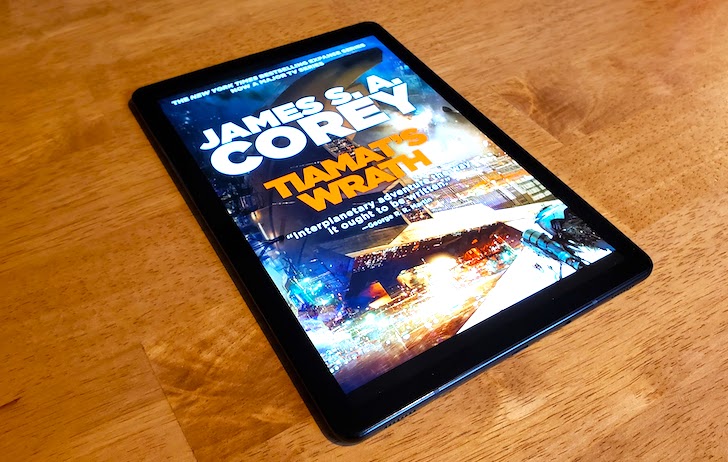 Time to be left alone. James Holden needs me.

I have a Samsung Galaxy Tab S4 (which I got for about half off, else I wouldn’t have bothered), to which I have my personal Google account synced, and that’s it. The other two “Paul Fidalgos” that Google believes to exist don’t have access to that device. It’s fully customized to the third of the Paul-triumvirate that just wants to be left alone for a while.

Now, obviously, you can achieve even more of a sense of distance from one’s Google-infused work life by using an iPad for one’s tablety me-time. There’s no denying that having a device with a very different industrial design aesthetic and a wholly different operating system (and one that is, let’s say, bubblier than the more utilitarian Android) does wonders for distinguishing it from the tools one uses for work. I may well go back to an iPad soon.

But the good news is that I don’t need to. I have, I think, I pretty good system in place to mitigate the spillage of work noise into my personal sanctum. And at the end of the day, I can put down the phone, shut down my computers, pick up my tablet (yes, even my Android tablet), take a deep breath, and chill the hell out.