From Moto's G7 to the Nokia 7.1 and a substantial chunk of Huawei's Honor line, a lot of comparatively "cheap" phones are inheriting flagship styling and materials, including the increasingly ubiquitous glass sandwich design. Even the upcoming Nokia 4.2 has a glass back, and it only costs $190.

It might look nice in photos, but having glass on both ends of your phone is ultimately a very polarizing, love-it-or-hate-it feature when you actually own one. Plenty of folks consider the delicate nature worth it if you get the benefit of wireless charging, and smartphone manufacturers seem to like it for the decorations and colors it makes possible — there's only so much you can do with anodized aluminum, and glass has lots of options. But, there's one immediately clear drawback to glass: it cracks.

Thanks for making the Pixel 3 XL's back glass, @madebygoogle /s

Just discovered this NSFL scene when I took off my @SpigenWorld case to add a metal plate for the magnetic mount.

I have no idea when it happened, could have been weeks ago.

Thankfully, that isn't an issue that you'll run into on Google's latest Pixel 3a or 3a XL, which feature a plastic unibody design. Plastic might scratch, gouge, or discolor, but it won't crack nearly as easily as glass will. And plastic doesn't have to feel cheap. Ask anyone that used one of Nokia's peak Lumia phones or 2011's legendary N9. Plastic can be nice, and it is here.

The Pixel 3a and 3a XL feel airy but solid. You aren't getting the palpable, expensive-feeling heft you'd immediately notice from a machined block of aluminum swathed in glass, but it's not that much lighter, either. In fact, the Pixel 3a only weighs one gram less than the Pixel 3, which does have that stereotypical glass and metal flagship design.

Of course, you can't expect the same sort of rigidity from plastic. While Zack over at JerryRigEveryting hasn't tested it yet, you can expect it to hold up to less abuse than harder materials would. Plastic is an objective compromise, but that doesn't mean it needs to feel cheap, because it doesn't. Your fingertips will be hard-pressed to tell that the finely textured matte back of the 3a is plastic.

As the move from aluminum to glass backs continues in the mid-range segment, the Pixel 3a's plastic design is a bit of an anachronism, but also a very real breath of fresh air. 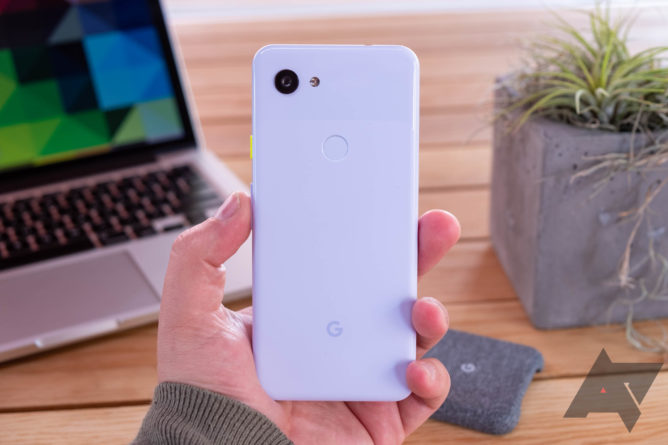