To many observers, OnePlus somewhat betrayed the value proposition its become known for when it announced the 7 Pro since it costs $120 more than the 6T did at launch. The company also unveiled a regular OnePlus 7 model that is essentially an updated 6T but with some meaningful upgrades to justify the phone's existence. Unless you live in the US, that is, where this phone apparently does not exist.

Despite it not really feeling like a new device, it's hard not to be impressed by the OnePlus 7. Barring a couple of minor superficial physical alterations, the form factor is exactly the same as the 6T. The display is an FHD AMOLED measuring 6.41 inches diagonally with a waterdrop notch cutting in at the top that houses the 16MP front camera and a small bezel on the bottom. The only real difference on the front is that the earpiece is much enlarged due to its use in the new Dolby Atmos stereo speaker setup, working in tandem with the functional speaker grill on the bottom. 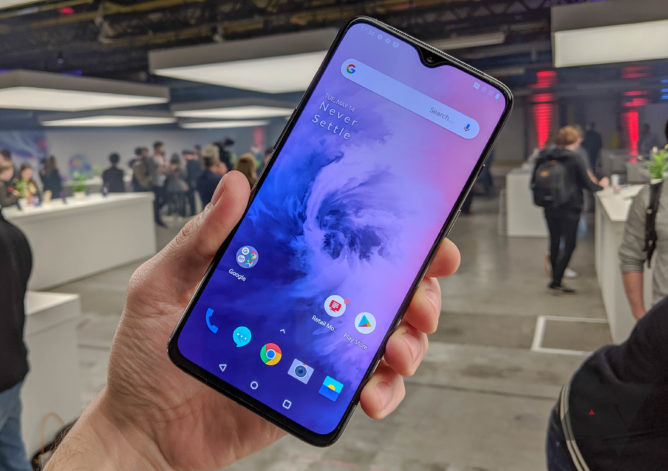 On the rear, the camera module has stretched downwards and now includes the flash within it — other than that, the same design language from recent OnePlus devices is adhered to once again. While you could get the 6T in two different black-ish finishes (one mirrored, one matte), the 7 only comes in Mirror Gray, unless you live in the select markets that will be getting a red version — China and India, I believe. The matte 6T was the most attractive colorway, in my opinion, so it's a shame that isn't the finish they went with for this new model.

The fit and finish of the OnePlus 7 are also much the same, and that's no bad thing because both phones feel great in the hand. The manageable size and reassuring weight also make it a pleasure to handle, which is more than can be said for the humungous 7 Pro — as beautiful as that phone is, it will be far too big for many people. Another area OnePlus promises improvement in is the in-display fingerprint scanner. In my experience, the one on the 6T beat out most competing implementations from other OEMs, and the new one is said to have a bigger sensor size. The in-display system has rightly been a divisive one, but hopefully, this won't be a total pain to use. 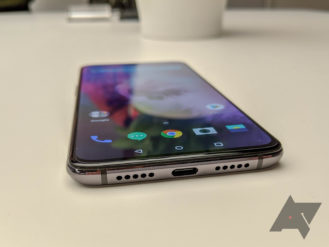 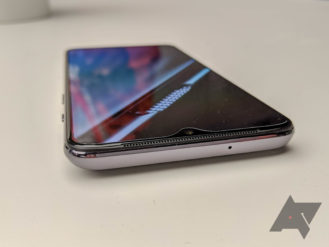 On the left side of this phone, you'll find the SIM tray and volume buttons, while on the right side there's the power button and the ever-popular alert slider. The USB Type-C port is on the bottom edge as usual with one dummy and one actual speaker grill. Once again, there is no headphone jack, and there won't be an adapter in the box. The hope, I suppose, is that this will persuade you to buy the newly-announced OnePlus Bullets Wireless 2 earbuds, but we'll have to put those through their paces to see if that's a good idea. They retail for £99/€99/$99.

Although the dual camera setup on the rear looks familiar, there's are significant improvements to the hardware used. The main camera uses the same 48MP Sony sensor (binned down to 12MP) as the 7 Pro but the secondary is just a 5MP depth sensor. OnePlus made considerable imaging progress with the 6T and the 7 Pro is said to build on that good work, so it seems safe to expect a decent experience on the regular. The front camera is unchanged at 16MP. 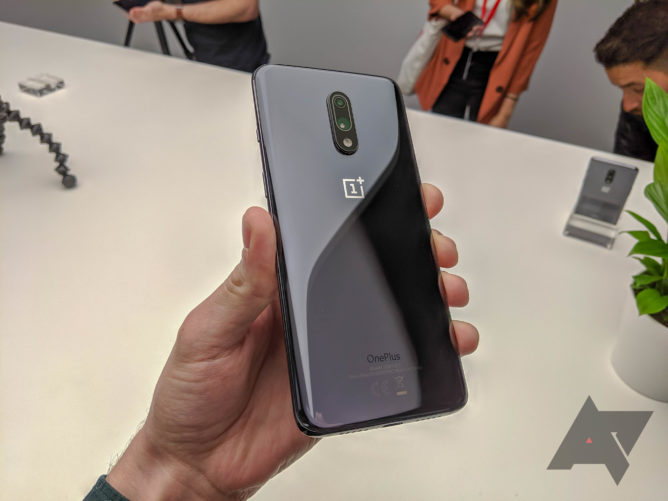 In terms of performance, from the short time I spent with the device as the launch event, I can say that it feels at least as good as the 6T. It's fast and smooth (just as OnePlus marketing materials would have you believe) just as it should be given the RAM/Storage configurations of 6/128 or 8/256. UFS 3.0 storage is being used in this cheaper model, too, so that could make the phone feel even snappier — no mean feat. I'll reserve more in-depth assessments for our upcoming full review of the OnePlus 7, but the early signs are predictably positive.

US consumers will be offered the 6-month-old 6T for $30 less instead of getting the regular OnePlus 7, for reasons that I'm still unsure of. It's either that or the substantially larger and more expensive OnePlus 7 Pro, which will be the only OnePlus device with a Snapdragon 855 in the US until the even pricier 5G variant is launched later in the year. 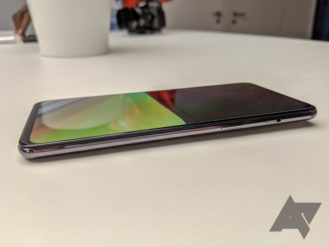 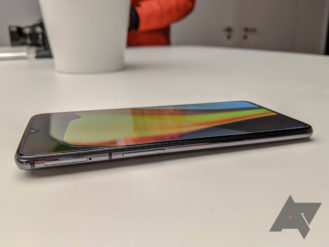 For those outside the US, however, the OnePlus 7 is an appealing proposition. In the UK, the £499 starting price is only £20 more than the 6T was at launch and for the extra money you get a newer processor, better cameras, dual stereo speakers, UFS 3.0 storage, and an improved fingerprint scanner. As incremental updates go, it's a pretty good deal, and US consumers have every right to be annoyed that it won't be heading stateside.