Details regarding the OnePlus 7 Pro have leaked consistently over the last few weeks, but the phone was formally unveiled just today at the company's launch event in New York City. The phone delivers quite a few new features, including a 6.67" 90Hz display and a pop-up front-facing camera, and improvement to haptics, as well as all the accouterments expected in a 2019 flagship like a Snapdragon 855 SoC, proprietary fast-charging upgrades (30W this time around), and super-fast UFS 3.0 storage. You get all that starting at $670.

As expected, OnePlus has moved the front-facing camera to a pop-out mechanism at the top of the device, with an "all new" design that's tapered on the left and right side, allegedly to better fit in your hand.

OnePlus calls the screen in the OnePlus 7 Pro "Fluid AMOLED." It has a Quad HD+ resolution, spanning 6.67" from corner to corner with a high 93% screen-to-body ratio. Most importantly, it has a staggering (for a phone) 90Hz refresh rate. The new in-display fingerprint sensor is rated to work in as little as 0.21 seconds.

OnePlus spent a lot of time talking about the decision behind the display included in the device — including the costs associated with it — but it thinks it's worth it. 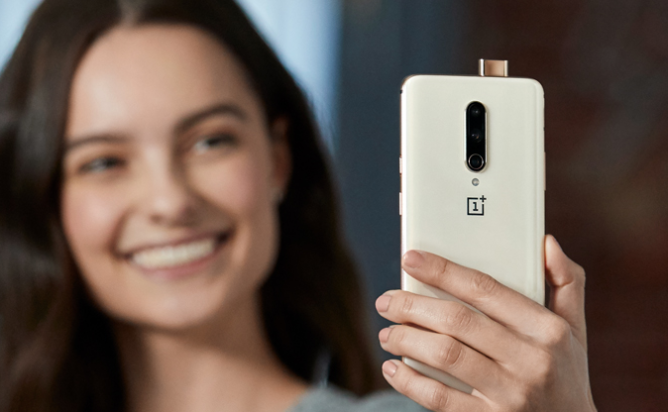 The front-facing camera is "the best the company's ever made." At 16MP the resolution isn't bad, and it pops out in as little as 0.53 seconds. It is rated to pop out up to 300,000 times, and has a built-in free-fall protection that retracts that pop out mechanism to protect it.

The 7 Pro upgrades the dual camera on the 6T with a triple camera configuration. The primary is a 48MP half-inch sensor (binned down to 12MP), with an f/1.6 aperture and OIS. Flanking that is a "3x" telephoto at 8MP f/2.4, and a 16MP 117 -degree FoV ultra wide-angle. They're all powered by something called "Ultrashot," which sounds awfully like HDR and the aforementioned pixel binning. DxOMark gives it a score of 111. 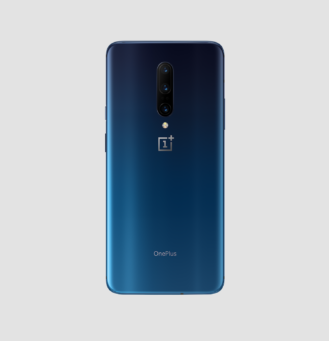 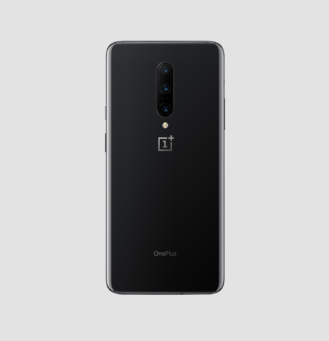 The OnePlus 7 Pro in Nebula Blue and Mirror Gray.

It has a Samsung-style dual stereo speaker system that uses both the earpiece and the bottom-firing unit, with sound tuned by Dolby Atmos. Finally fighting the long-standing criticism faced by its previous phones, the company has upgraded to a new linear, one-axis haptic motor. And, as you'd expect, it runs the company's stock-ish, mostly-bloat-free OxygenOS, which includes new features like a screen recorder, Zen Mode, and "Fnatic" gaming mode. It will be available in three colors: Mirror Grey, Nebula Blue, and an upcoming gold and white available later. Most important, though, is the price, which starts at $669 for 6GB/128GB. Prices go up to $699 and $749 based on RAM and storage configurations. Sales open this Friday the 17th at both T-Mobile's site, stores, and OnePlus' site (you can use our $10 off voucher for a discount on orders that include accessories). The T-Mobile store in Times Square will be doing advance sales starting today, though, with five other stores in Chicago, San Francisco, Las Vegas, and elsewhere also selling it tomorrow.

For more details, keep an eye out for our upcoming review.