Let's get the bad news out first. In Beta 3, you can't pin apps to the top of the Share menu anymore. This feature, which was introduced in Nougat, was one of the workarounds that sped up the sharing process for users, letting them keep their favorite apps at the top of the list so they don't have to scroll and look to find them. Now, when you tap and hold any app, you only get the App info option, no more Pin. And even if you had pinned some apps to the top in Q Beta 2 or prior, they won't carry through, so you're back to the wild west of app order. 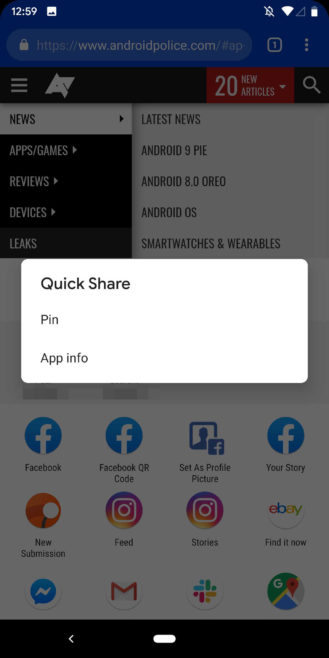 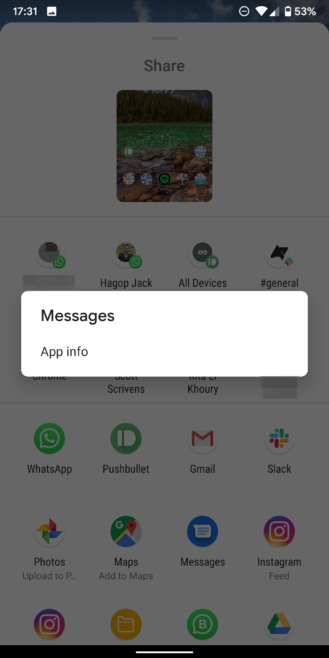 Left: Tapping and holding on an app in the Share menu on Android Q Beta 2. Right: Beta 3.

Now the good news. You may remember a time before Pie where the Share menu had eight Direct Share targets. Then in P DP4, they were trimmed down to four, likely in a workaround to speed up the pulling process. Now that the menu's infrastructure has been improved, we can have our eight targets back. Q Beta 3 is implementing them in a new way though. When the Share overlay shows up, only four targets are visible, but when you pull it up and expand it, you get eight Direct Share icons. 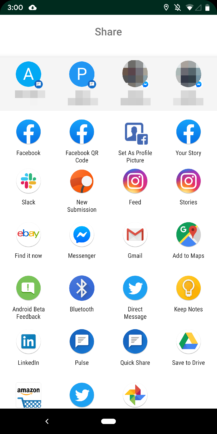 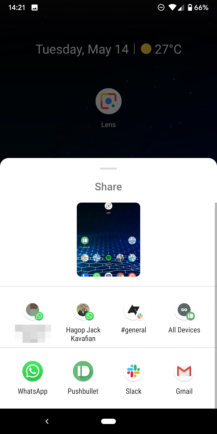 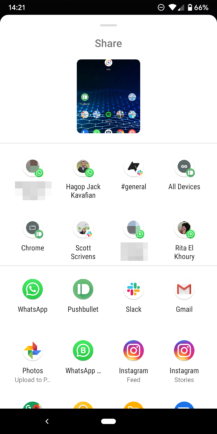 I prefer this flexibility, especially because Pushbullet's Chrome target always seems to jump between fourth and fifth position for me, despite how unbelievably often I use it for screenshots. This way, I can just expand and see it when it's hidden.

I need to reiterate that these changes only affect the native Share UI. The best way to check it out is to take a screenshot and tap to share it, or share a page from Chrome. Plenty of apps, from Google and other companies (including Photos, News, YouTube, Maps, Amazon, etc...) use their own Share interface, and those menus don't abide by these rules or changes at all.

Android Q Beta 4 introduced more changes to the Share menu, with alphabetical order for apps and a new row of four suggested apps.