Alex Jones is officially not welcome on Facebook anymore. He and his far-right, conspiracy-obsessed outlet Infowars, along with a handful of other extremists, were banned on the social network earlier this month. Jones’s YouTube channels had been taken down months before, his podcast can’t currently be heard on either Apple’s or Google’s podcast services, and you won’t find his Infowars app on the iOS App Store.

But you can still get it on the Google Play Store and install it to your Android device. It’s right there.

Apple kicked Infowars off its store in September of 2018, the day after Twitter nixed Jones’s account. All of this was happening in the context of an ongoing defamation lawsuit brought against Jones by families of the victims of the Sandy Hook massacre, who Jones adamantly insisted had staged the shooting, which spurred his listeners to engage in a campaign of frightening harassment.

This is to say, Alex Jones was getting himself banned all over the place at the time, and Apple’s decision to bar his app happened fairly late in the saga, and was less controversial, relatively speaking.

So why didn’t Google just do the same? We still don’t know. Google did not explain their reasoning at the time, and did not respond to our latest requests for comment.

This is some very dicey, difficult stuff. All of the major tech platforms are all struggling—in public—over how best to deal with those individuals and organizations who use their services to promote hate, harassment, violence, and dangerous misinformation, all while honoring the principles of free expression.

Some companies, like Apple, have been unapologetic in their public condemnation of certain figures and viewpoints. Others, like Twitter, seem to writhe in anxiety over the prospect of denying anyone the right to tweet horrible things.

Google is unique in that its manifestations are numerous, with platforms that include video (YouTube), apps and digital content (Play Store), news curation (Google News), advertising, and of course, search. White supremacy and other forms of hate speech find their way into all of these corners of Google’s vast ecosystem, and in each case, Google must decide whether that speech violates its policies, or is just too harmful to allow it to have a home on its servers.

But are the rules different for what’s available on Google Podcasts versus YouTube versus the Play Store? Why is Alex Jones unacceptable in video or podcast form, but in good standing as an app? Isn’t it all the same stuff?

Google has banned apps for violating hate speech policies before. Perhaps most famously, in 2017 Google banned the Twitter clone Gab, which had become a favorite of the alt-right (and, one assumes, Infowars fans). Google has even banned an app by the Taliban! Did you know the Taliban had an Android app? They totally did! But you can’t get it on the Play Store anymore.

But you can still get Infowars. It's rated for ages 10 and up!

We don’t allow apps that promote violence, or incite hatred against individuals or groups based on race or ethnic origin, religion, disability, age, nationality, veteran status, sexual orientation, gender, gender identity, or any other characteristic that is associated with systemic discrimination or marginalization.

If we can safely assume that the content on the Infowars app is more or less identical to whatever was broadcast on its YouTube channels, and I think we can, it’s hard to see how Infowars isn’t in violation of this policy.

When Google banned Gab’s app, they explained their reasoning to Ars Technica:

In order to be on the Play Store, social networking apps need to demonstrate a sufficient level of moderation, including for content that encourages violence and advocates hate against groups of people. This is a long-standing rule and clearly stated in our developer policies.

Now, Infowars is not a social networking app. By all appearances, it’s mainly a way to consume Infowars content, the very content that Google, in its YouTube manifestation, decided had to be taken down. One assumes this is also the same content from Jones’s podcasts, which is nowhere to be found on Google Podcasts.

Infowars is also not among the sources Google uses for the stories it curates on Google News (or at least there’s no option to “follow”). So the same content that is barred from Google in myriad other ways remains available on Google’s official Android app store. 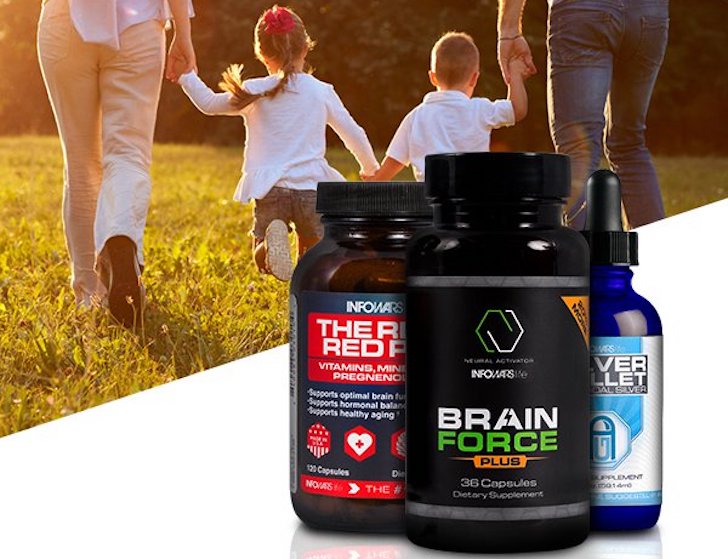 Actual product from the Infowars store. Get your kids some Brain Force and "Real Red Pill." It's what American families do.

Perhaps it’s worth noting that the Infowars app also gives users the opportunity to order Alex Jones’s pseudoscientific vitamin supplements. In fact, the first screenshot on display in its Play Store listing shows some of the pills you can buy from him. So maybe the rules are different for hate speech by snake oil retailers. Someone get Dr. Oz to go on an angry tirade about how much he hates, I dunno, the Irish, and let’s see what happens to his app listing.

Just because Alex Jones and others have been banned from platforms, that doesn’t mean you can’t still find them, and it definitely doesn’t mean that you can’t find all manner of grotesquely racist, violent, or conspiratorial content on those platforms. The circumvention of bans has been well documented, and if you really want to see Infowars content on Facebook and YouTube, you’ll be able to find it. And if you really want to soak your amygdala in hate, racism, and rage, good golly you can dive right in and never come up for air. Welcome to the internet.

With just a quick jaunt around the Play Store, typing in searches that will probably get me placed on some kind of watch list, I could find various Alex Jones fan apps, and apps that curate alt-right news, radio, and podcast content. (Louis Farrakhan was banned by Facebook along with Jones and others this month, but the Nation of Islam’s official Android app was easy to find, for what that’s worth.)

Search terms related to white supremacist figures sometimes turned up a few deeply sketchy looking apps and games, and one wonders what sort of developer decides that the names of known neo-Nazis would make for good SEO keywords.

What I couldn’t find was much in the way of official apps for known racist figures or institutions. White supremacist Richard Spencer’s National Policy Institute has no presence in the Play Store in app or podcast form, for example. ISIS apparently once had a children’s app for learning Arabic, but it’s not there now.

Yet Infowars’ official Android app is still there.

Responding to a request for comment, a Google spokesperson provided links to Google's current content and developer policies, noting that apps or developers which violate these policies are subject to bans or suspension from the Play Store.

Google did not provide any information specific to the Infowars app.