You know how sometimes you use an app or service for years and don't notice some basic functionality is missing, until another user points it out or you try to find it for the first time. This happened yesterday with our very own Artem, who discovered a rather important omission from Google Photos: once you've shared an album with a user, you can't remove them from it.

The reason, as August (@4U6U57) pointed out, is that Photos shares albums in a particular way: it creates a public link and anyone with that link can access those photos. Once you send that link to the person you want to share with and they open it, they join the album. So albums are nothing but links really, and you can't "remove" someone in the basic definition of the term. 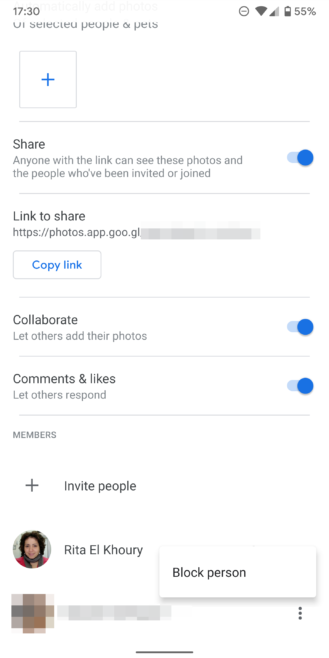 When users complained about this on Photos' community forums, support reps suggested following one of two solutions, each with its own subset of annoyances.

And keep in mind that in both cases, all photos the person you're trying to block has already downloaded or saved to their library will remain with them... as with most (all?) photo sharing services.

Neither of the two solutions is ideal, but thanks to an answer from Photos' Product Lead, David Lieb, we know the team should be working on implementing a better way to remove someone from an album. How exactly that would be possible, we don't know, but we'll keep an eye open.

Google has changed the way albums are shared on Photos. One option lets you avoid link sharing and only send the album only to people you approve of, but if you still prefer to use a publicly-accessible link, you can now remove unwanted people from the album too, so this issue has been fixed.

[Update: It's a budget phone] HTC says it's making a second blockchain phone