Diving into a new Android beta version's settings and sub-menus is fun. You often stumble on something that leaves you scratching your head, wondering whether it's new, and confused about what it's supposed to do. That's the case with the new Notification Assistant setting on Android Q, and upon closer inspection, this little menu may hide some very interesting changes to notification management that we didn't expect.

First, let's talk about what we have now. Under Settings > Apps & notifications > Notifications, there's a new Notification Assistant option that lets you pick which app you'd like to behave as your... you guessed it... notification assistant. The only option available is Android's default Notification Assistant. That's all good and redundant, until you try disabling then re-enabling it. You get the pop-up shown below that explains the powers that it has: read your notifications, modify or dismiss them, trigger action buttons in them, and turn Do Not Disturb on or off. That is a lot of control given to one app. 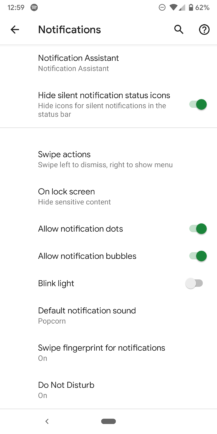 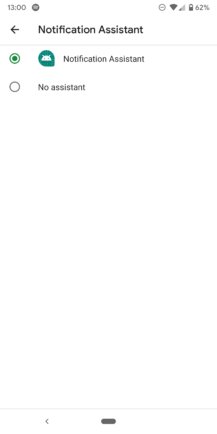 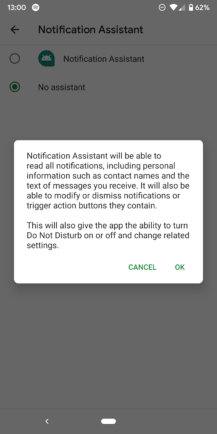 The immediate inference here is that you'll be able to pick a third-party app as your Notification Assistant, and that is indeed confirmed in the API, with one clear limitation: only one app can play this role at any time, so you can't have multiple apps managing others freely. The default service you pick can read other apps' notifications, but more importantly, has the ability to act on them and adjust them. An example shown in the video below from developer joaomgcd (of Tasker and AutoNotification fame) shows how he can use his app to "inject" a third button in an existing notification.

The implications are quite vast, especially for developers who make notification manager apps. Think of Joao's AutoNotification "hack" to show a Read button in Gmail's notification. Currently, his app has to hijack the Gmail notification, duplicate it and add the new button to it, then show that new notification to you. It looks almost the same, but it's coming from his app, not Gmail — which you can tell when you tap and hold to go to the app info. With this change in Android Q, it would technically be possible for Joao to leave the Gmail notification and just add the button to it (obviously if you set his app as your Notification Assistant).

Other apps whose aim is to simplify your notifications or help you manage them, such as Daywise or Leaf, could have more control over your incoming notifications, also without resorting to the duplication process.

With Pie and now Q, we've seen Google exhibit some multiple-personality disorder symptoms: one change gives developers more power, another takes something away that they've been using for years. This one definitely falls in the "more customization" bin, and I wonder if the removal of unofficial API support lead to its creation. I've previously come across many apps that do questionable things with notifications, so if providing an official API to do them can curb that abuse, it'll be more than welcome.

We'll keep an eye on this new Notification Assistant, and hope to see some creative uses from developers to improve the hassle that is the ping-ping-ping-ping-ping of our daily lives.

As XDA reports, Google has removed the public API for the Notification Assistant — both documentation pages linked above aren't there anymore. XDA also spoke to Googlers at I/O who confirmed that this feature wasn't intended for the public. It's such a shame, because the promise of this API was huge and having a third-party option other than Google's own would have allowed developers and users to do unexpected things with that level of access to notifications. But it's understandable that Google wouldn't want to open this up for any dev, as it would be easily open for abuse.

[Update: Podcasts on web official] You can listen to Google Podcasts on the web with a simple ...