The smartphone market isn't what it used to be anymore. By now, pretty much every person in North America owns at least one of these devices, and combined with mostly iterative improvements and slowing innovation from manufacturers, demand has naturally decreased. Thus, shipments in Q1 2019 are down to 36.4 million, 18 percent less than last year's Q1 record-breaking 44.4 million. This is the steepest fall ever recorded. 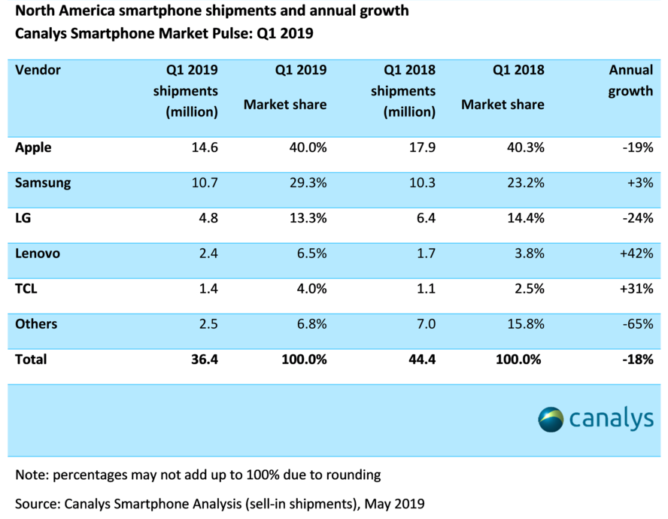 All big manufacturers but Samsung and Lenovo felt a steep decline in their device sales. Apple sold 3.3 million phones less than last year around this time, resulting in negative growth of 19 percent. Still, the company remained the biggest player by far with a total of 14.6 million products exchanging ownership versus Samsung's second spot with 10.7 million. However, Samsung has been closing in on its rival and sold almost as may S10+ and S10e as Apple sold iPhone XRs. 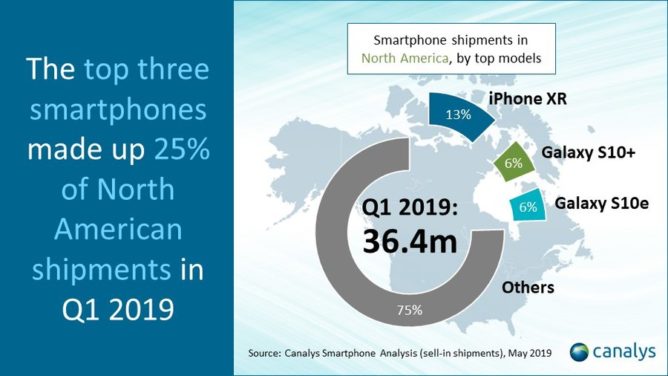 LG took an even harder hit than Apple in relative numbers and lost 24 percent of its sales, but due to its smaller volume, that only translated to 1.6 million fewer devices. In total, the company sold 18 percent fewer smartphones this Q1 than last year's.

But where there's shadow, there must be light. Samsung could top its Q1 2018 sales by about 400,000 devices. With a 3% growth, that's certainly a slowdown and not an impressive stat, but at least the company's sales weren't shrinking. Lenovo, on the other hand, appears to be the rising star in North America. While it only sold 2.4 million devices this quarter, that translated to an uptick of 42 percent over the 1.7 million last year.

Meanwhile, Google is nowhere to be seen in these statistics and reports it's struggling with its hardware sales. But who knows, maybe the recently released Pixel 3a and 3a XL can be a turning point for the company.

Note that these statistics only deal with absolute numbers of devices sold. This doesn't take into account that smartphone prices are generally rising, meaning that fewer devices don't necessarily mean less revenue. Still, it's clear that the once booming smartphone market is going downhill in North America, which was bound to happen eventually. At some point, innovation dies down naturally, and many consumers are happy with the devices they own, similar to people holding on to PCs and laptops longer these days.