Google is putting a lot of work into its keyboard, with user-facing changes occurring with pretty much every bigger release. Most recently, we've seen the addition of a clipboard manager, hints for OCR support, and a fresh look for the settings page. After the addition of these somewhat hidden features, Gboard now receives a redesigned interface for autocorrect suggestions with version 8.2 that jumps right into your view.

The new design makes it more obvious what a word you're typing is going to be autocorrected to after you hit the space bar. There is a blue-ish glow underlying the suggestion in the top row of the keyboard, which is the one Gboard is going to change the marked text to. The underlying feature itself isn't new, though – before the redesign, the word to be autocorrected was just printed bold.

Another interface change lies in the underlined leftmost suggestion. This is the suggestion that has always followed along what you were typing, so you could overwrite whatever Gboard suggests in the middle. The only thing that's new here is the fact that this phrase is now underlined, probably to make clear that it's different from the other suggestions.

If you'd like to see these changes for yourself and haven't received the update yet, you can download it over at APK Mirror. Alternatively, you can check if the Play Store already offers you the new version by clicking the widget below.

Google is heavily testing new things in this release and switching on server-side changes, as we've just got word of a new "Trending searches" feature that shows up when you hit the search button on the keyboard. If you become part of the test, you'll see trending keywords in pastel-colored boxed on top of the search bar. 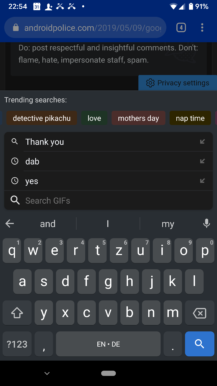 It's funny that there are yet more differences in the two screenshots we received about this feature, as one of them features a white search box and black text on brighter colors, while the other is inverted.