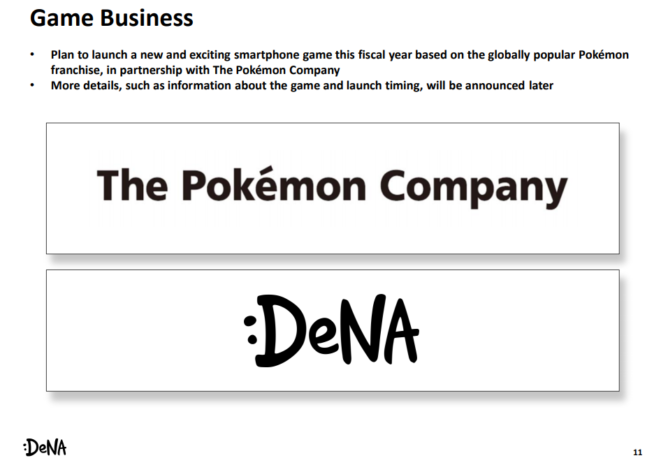 Above is the excerpt from DeNA's investor briefing. As you can see, there is very little information to go on. We do know that this project will be based on the Pokémon license and that it should land sometime before March 2020. The excerpt also states that more details will be announced at a later date.

It would be nice if DeNA would get inventive with this upcoming title, as there are many different genres that could be explored through the Pokémon license, though I fear the most obvious choice is that the title will end up being a gacha game. Of course, we won't actually know anything until more details are revealed.

One thing that's a little concerning about this recent arrangement is that it's a partnership between DeNA and The Pokémon Company (not DeNA and Nintendo), and as we learned in March, Nintendo has kept a short leash on DeNA (and its other mobile partners) to ensure that the monetization of its mobile titles remain fair. Currently, there is no way to know if The Pokémon Company cares enough about its Pokémon license to do the same.

[Update: They're back] Google reminders are broken in search, again