Google's latest attempt at gesture navigation in the third Android Q beta has caused quite a stir. Some commend the decision to finally rip off the superior iOS-style home gesture, while others aren't happy with the new swipe-from-the-side back button. No matter what you think of it, it's here to stay, but the trusty old three-button navigation will be included as an option on all phones going forward.

In an I/O talk (see the video below), Googler Rohan Shah took a more in-depth look at the new gestures and confirmed that they will be the future of Android navigation. Thankfully, due to its accessibility-friendliness, the three-button nav will be returning after being absent on Pixel 3. On stage, Shah said they would unify efforts behind these two systems to make it easier for developers to ensure their apps are nav-ready, but that doesn't mean OEMs can't come up with alternatives.

There was an implication that only these two nav modes would ship with Android smartphones running the final build of Android Q, but Google has clarified that position in a further statement to Android Authority. OEMs will still be able to include their own navigation implementations in their Android skins, with Google viewing these as features for power users. Out of the box, though, the two stock options are likely to be recommended to users. 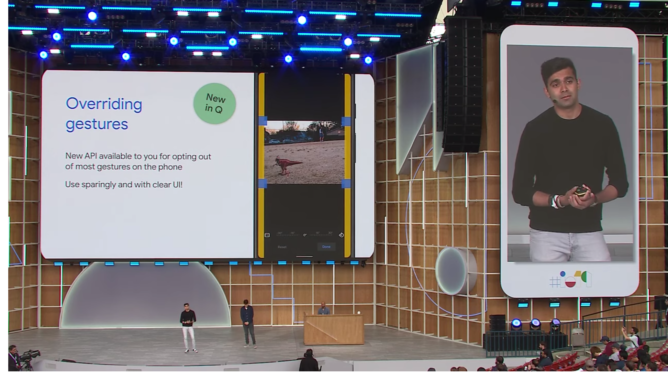 In the same presentation, some more details were shared about how the divisive new back button would work with existing Android functions like the slide-out hamburger navigation drawer. Exclusion zones can be set in apps for areas where touch input is likely to conflict with the back gesture. Similarly, if an app has a slide-out menu, the back button will be overridden on the corresponding side unless the drawer is expanded, but will still work on the other side. This should assuage some of the concerns that Q Beta 3 users might have after using these new gestures over the last couple of days, but whether or not it will lead to an intuitive UX for most users remains to be seen. 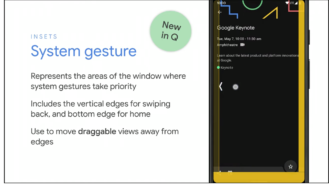 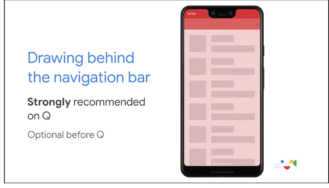 This is all part of a drive to make Android more immersive in Q and beyond, with apps encouraged to draw behind the navigation and status bars for truly edge-to-edge views. If there's one key issue I can see, it's that all of this presents a fair amount of extra work for app developers, and this could lead a lot of inconsistency in the next version of Android while apps are slowly being updated to comply with the changes.