At I/O, Google announced that Android Q Beta 3 would not only be available on its recent Pixel phones, but also 15 phones from other OEMs. Included among those 15 phones is the Mate 20 Pro, indicating that Huawei isn't slacking when it comes to the 10th version of Android. The company has just announced which of its phones will be updated to Q first. 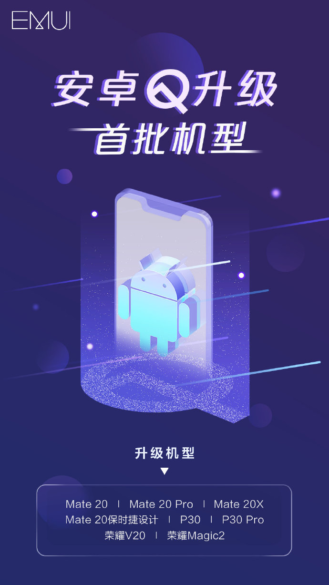 The device list is above, but in case it's unclear with all of the Chinese characters, it's as follows:

Aside from the device models, Huawei hasn't really clarified what will come on its Android Q-based EMUI. There is a Q Beta 3 build available for the Mate 20 Pro, but it's only being released to developers with at least one app published on the Play Store. Nonetheless, that should be enough to give us all a glimpse of EMUI on Q.

[Update: Eventually] Samsung will soon announce the fate of the Galaxy Fold