There are so many announcements at Google I/O, keeping track of them all is a bit daunting. While many of the sessions are intended for developers, there are still a lot of details that might directly impact users, or at least the indirect impacts can be fairly obvious. That's where a lot of topics from the What's New in Google Play session land. Some of the news was about brand new announcements while other things were recaps of recent launches or minor updates to current projects. Regardless, everybody will be seeing a lot of changes over the next several months, be it more varied listings for apps, (hopefully) fewer bizarre disappearances of apps, and lighter weight downloads and installs.

Kicking off the presentation was a promise to be more transparent about upcoming changes to the store and policies. This included a commitment to give better guidance for dealing with changes and provide sufficient time for app developers to make the necessary adjustments. This comes in response to a controversial new policy that closed the gate on SMS and phone permissions for many types of apps and only gave about three months for app developers to make adjustments under threat of expulsion from the Play Store.

This is obviously very important to developers, but a large audience of users also experienced issues as apps they had been relying on were pulled from the Store or suddenly lost key functionality. Hopefully situations like this won't hit as hard or as fast in the future.

Google has been pushing developers toward App Bundles since announcing them at I/O last year. This allows a developer to create multiple modular pieces of their apps, and then users only download the pieces necessary for their device (i.e. processor architecture and display density) and their language, which can drastically reduce the download and install size in many cases. Developers could also use this to segregate features that only a small percentage of users would need so the majority of users wouldn't need to download data or waste storage space on unused code.

App bundles and dynamic delivery of features are now officially out of beta, and with the announcement at I/O there are also some new features that will improve the experience for developers, including:

To highlight some of these improvements, Google featured a short developer story with Netflix that discussed how the company cut down app size by about 33% in the switch to App Bundles. It's hard to be sure if this really had much impact when Netflix is responsible for about 15% of the world's Internet traffic, but that's not really the point of the story. 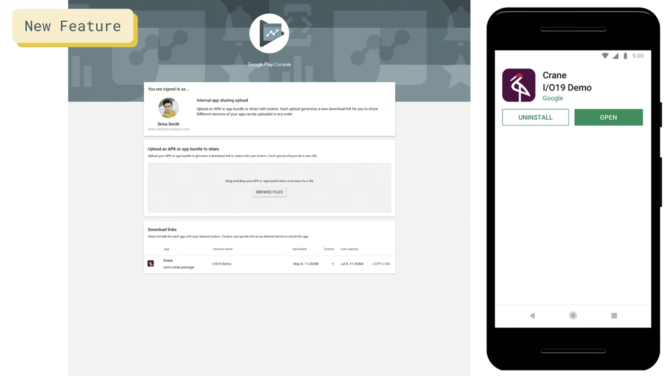 Building on top of the App Bundle featureset, Google Play is also introducing a major new feature to make things easier for testers. A new feature called "internal app sharing" will allow developers to upload a bundle and immediately generate a URL that can be shared with select testers. When they visit the URL, they'll be able to install that build of the code hassle-free. This should automatically bypass version code conflicts, signing keys, and other types of validation steps that often interfere with installing test releases.

App developers can now add a bit of code to their apps that checks the Play Store to determine in an update is available and lets users know if the new version is required. In instances where it's okay to delay an update, a dialog box can make the recommendation and users are free to ignore it for now or immediately download the latest release. 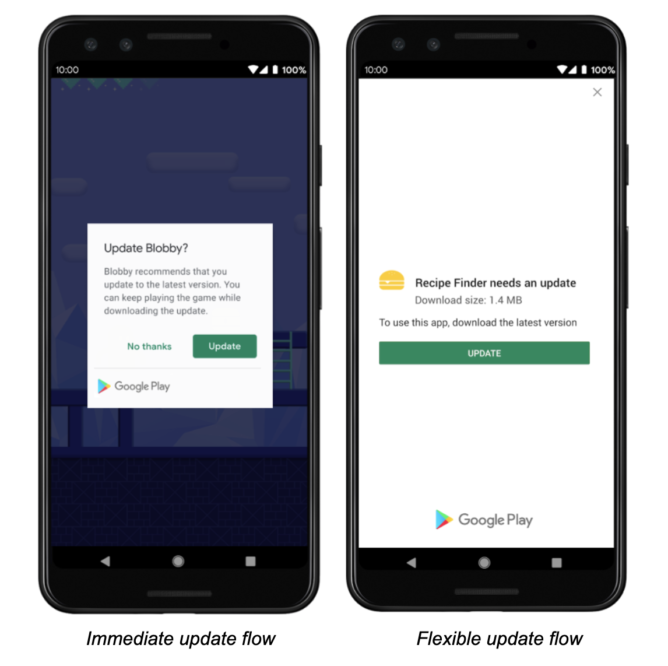 You may have already seen the news that Google Play will be recalculating ratings later this year in an effort to better represent the current state of apps rather than a lifetime average. In addition to that, the Console will also help developers identify reviews that may deserve special attention and even generate suggested replies to get the ball rolling.

The content of your Play Store page is getting more customizable this year. First, Google is launching two additional features for pre-registration that will allow developers to create special listings for pre-registered users and offer special rewards when people join early.

Google is also launching a new early access program that allows developers to customize listings based on the install state of the app. Put simply, it will be possible to create different versions of a listing based on whether an app has never been installed, it's currently installed, or it was installed in the past but uninstalled later. If you're interested in joining the early access program, sign up here. 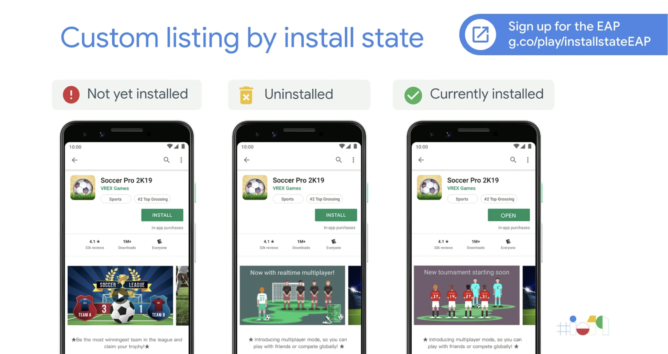 [Update: Live, timers too] You can finally just say 'stop' to silence your Google Home and ...