We've already taken a look at one of the new feature flags in the Android Q Beta 1 — a buggy but potentially very useful native screen recording function — but there are several others worth mentioning too. Some of them bring about barely noticeable changes, but a few are actually pretty interesting.

Thanks to 9to5Google, we know what many of the new flags are used for. Starting with the less consequential flags, there's one that slightly changes the animation when going in and out of the always-on display screen for some wallpapers (settings_aod_imagewallpaper_enabled). For some of the more dynamic wallpapers that can subtly show on the AOD screen, turning this flag off causes any trace to disappear after several seconds. Another flag can be used to turn off the hints about things like DND and night light status that appear a the top of your settings (settings_dynamic_homepage).

A slight reorganization of the 'Network & Internet' settings page can be achieved by turning on the settings_network_and_internet_v2 flag, but it does little more than automatically expand the 'Advanced' section and reorder some of the sub-settings (see above right). A flag called settings_mobile_network_v2 does a similar thing with the Mobile Network settings page, but is on by default.

There are more useful options, though, such as the flag that enables sharing of WiFi passwords with a QR code (settings_wifi_sharing), which is switched on by default anyway. The settings_global_actions_grid_enabled flag rejigs the power menu so it's in a grid lower down the screen (see below right). Another flag that's also on by default randomizes your MAC address each time you connect to a different network (settings_wifi_mac_randomization).

If you often need to switch between different audio outputs while playing music, there's a flag that will make that much easier than before. Toggle the settings_seamless_transfer option and you'll see a little musical note icon in the music player notification. Tapping it brings up a menu for switching outputs (see above center), which is much more convenient than delving into the audio settings each time.

There are still some flags that we don't yet know the purpose of, so if you manage to figure out any of the others, do let us know in the comments.

Our tipster Nick has discovered the purpose of yet another flag. The settings_mainline_module toggle adds a new line to the Android version menu, as you can see in the screenshot below. It's hard to say why this is hidden behind a flag other than it not being information most users would ever need to see.

No longer there in Android Q Beta 3

As of the third Android Q beta, feature flags are no longer showing up. The menu for them is still present in the Developers Options list, but the list is now completely empty. Interestingly, the list is still populated and usable on a OnePlus 6T running Q Beta 3. 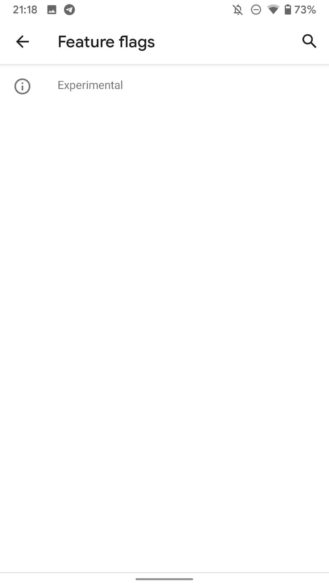 It could be because there's a bug in the Pixel build that's preventing them from appearing, or it could be that Google plans to remove them but the other builds haven't caught up with their own yet. We have heard about other differences between Pixel Beta 3 and what other phones are getting, so that could explain it one way or the other.

Google Messages is suggesting GIF searches based on your conversations