When I set up a new device, I always increase the screen timeout to a minute or two — otherwise my screen frequently turns off when I'm reading articles. Android Q Beta 3 might have the solution to this, in the form of 'Adaptive Sleep.'

A new option for Adaptive Sleep is appearing for some users on Beta 3 of Android Q. For those who have it, it's accessible by searching "adaptive" in the Settings app. The option's page has a simple graphic with the caption, "Your screen would not dim and go to sleep if the device detects your present attention." 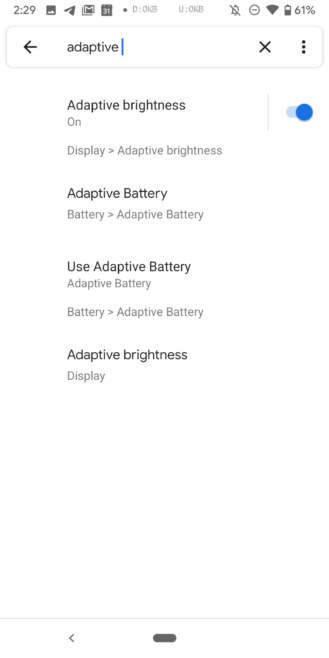 Oddly, the options page doesn't have a toggle. Combined with the fact that it's not appearing for everyone, it might be an incomplete feature that wasn't meant to appear yet. We've reached out to multiple people at Google, and we'll update this post when we get a response.

There was clearly something we didn't quite understand going on with Adaptive Sleep in Android Q Beta 3 settings, and all the critical thinking in the world wasn't going to fill in all those gaps. Thankfully, we've been in touch with a ranking Google engineer who was kind enough to set the record straight.

Basically, the setting is a placeholder for Android OEMs who want to implement this kind of stay-awake behavior. Google crafted out a spot for it in system settings, even if it's not something that's going to be available on every device. And sure enough, Adaptive Sleep isn't present on Pixels — that we ran across it at all is simply another Beta bug.

The fact that the image we see here — which seems more concerned with screen brightness controls than anything about detecting users — doesn't match Adaptive Sleep's described functionality is further testament to the glitchy nature of its presence in Q Beta 3.

Google I/O 2019 roundup: All the announcements, news, and devices

Pixel 3a and 3a XL review: They make almost any phone under $500 look bad