ARcore is one of Google's both fun and impressive projects. It's the backbone to many augmented reality apps like Google's own Lens and Playground, as well as apps like IKEA Place or games like Pokémon Go. Now, it also powers a new navigation mode in Google Maps. At I/O, Google has announced a sleigh of improvements to make the experience even more realistic, such as improved support for moving objects in the real world and better shadows and lighting.

Let's start with improvements to Augmented Images, which lets developers build AR apps that can interact with certain 2D objects in the real world, like posters and product packagings. ARcore is now better at recognizing moving objects, so that virtual objects can attach to those more easily.

Environmental HDR on and off.

Another improvement comes to ARcore's Light Estimation, which helps translate real-world lighting to virtual objects. The API was updated with Environmental HDR, which works similar to high dynamic range in cameras or on screens. It uses the available light data from the real scene and extends this light to digital objects, which should create more accurate shadows, highlights, and reflections. 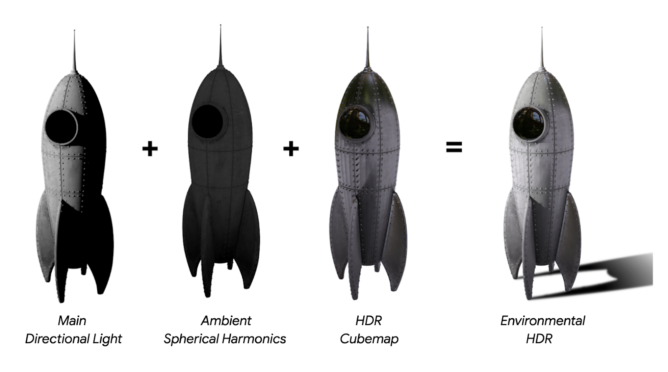 Google is also making it easier for web developers to implement AR objects into their websites. A new scene viewer will surface later this year, which allows users to jump right into an AR experience from their Google search. People don't need an additional app for that – it's all built in.

The improvements should lead to more realistic experiences in AR. After Google shared that it's improving its VR headset Daydream with a see-through mode last year, augmented reality seems to be the way to go for the company now.