Google just announced its Home products would be part of the Nest lineup, and the first one to be rebranded is the Home Hub, the company's smart display powered by Assistant. Together with the name change, Google dropped its price down to $129 instead of the original $149 MSRP, but you can get a much better deal by buying two simultaneously for just $140.

Despite the product getting a name change, it's exactly the same Home Hub that came out last October. It still features a 7-inch touchscreen, as well as a full-range speaker and far-field microphones to hear you from across the room. In fact, Costco still refers to the product using its original name, which may be to get rid of the remaining units with the former name, even though the rebranding doesn't change any of the features. 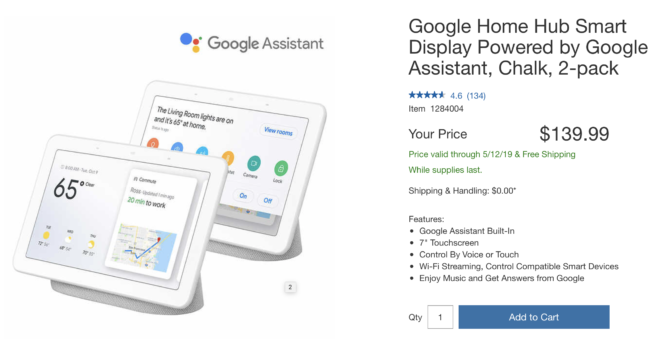 Unfortunately, only the chalk version is listed on Costo, but the screen mostly covers the fabric, so the color shouldn't matter that much in your decision. However, if you're interested in placing video calls with your smart display, bear in mind the Nest Hub doesn't have a camera, which means others won't be able to see you.

The offer is valid until May 12 until supplies last, so I'd recommend getting yours quickly before they're out of stock.