The Home Hub is one of Google's hardware success stories, marrying the smarts of the Assistant with a touch screen and pretty visuals. Criticism of it could be that it's too small and can't do video calls, which is where the Google Nest Hub Max comes in. The display has been increased from 7 to 10 inches and there's now a camera for use with Duo calls and more.

If you're wondering what the "and more" entails, the clue is in the name. This is a Nest-branded product and the smaller Home Hub is also being renamed Nest Hub. While nothing will functionally change for the product already on the market, its larger new sibling will also double as a Nest camera. If all you want is a bigger smart display, you get that by default, but use the Nest app and you'll get additional security features such as notifications when the camera picks something up while you're out. 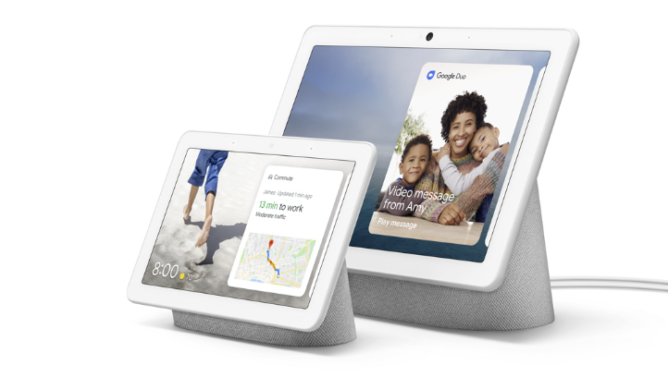 With Duo, you'll be able to make video calls to and from the Nest Hub Max, as well as leave video messages to remind family members of things later on. Auto-framing is capable of panning and zooming to focus on the important subjects in each video call, so you don't have to worry about getting everyone in exactly the right position. If you're chatting while moving about, it'll (somewhat creepily) follow you around the room. The privacy conscious among you will be pleased to know that the mute switch on the back applies to both the microphones and the camera, albeit without a physical lens cover like smart displays from Lenovo.

Since these devices are intended for use by multiple members in a household, the camera will also be used to for Face Match, which like Voice Match will be able to personalize content depending on who is interacting with the Nest Hub Max. Your face data will be stored on the device and not in the cloud. Google really wants to drive home the fact that this thing has a camera, as evidenced by another feature called Quick Gestures. If you're in the kitchen with grubby hands and you want to pause or play content without shouting or messing up the screen, simply look at the camera and raise your hand. Audio quality on the Home Hub isn't anything special since it was likely of secondary importance to the screen. The Nest Hub Max — owing, in part, to the sheer size increase — exhibits considerable improvement in this respect. Its speaker setup comprises two 38mm tweeters and one 78mm subwoofer which offer 2.1 stereo sound. In my brief time with it, I can confidently say that it will be second only to the (now confusingly named) Home Max in terms of sound quality when compared with the rest of the lineup. It's much louder than any of the others.

If the sound is vastly improved over the device formerly known as Home Hub, so is the display — this one can boast an HD resolution. As with its smaller sibling, an Ambient EQ light sensor ensures you're never blinded by the Hub Max's screen in a dark room with real-time adjustments depending on the environment. If the camera is on and being viewed by someone else, a green light will be clearly visible at all times, similar to what you'll see on a Nest Cam. When it comes to smart home control, Hub Max supports Thread for low-power wireless mesh networking. Another new feature brings a YouTube TV guide so you can use it as a kitchen TV. 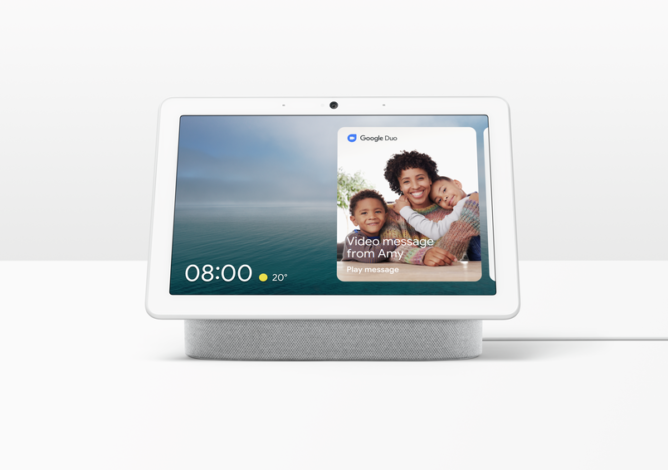 The Google Nest Hub Max will be available to purchase this summer, costing $229 / £219. It will come in either Chalk or Charcoal at launch, but don't be surprised to see other color options arrive in the future. At the same time, the smaller Google Nest Hub will get a permanent price drop to $129 / £119.