The I/O keynote is over, but there are already new features surfacing for Android Q that were only briefly brushed upon during the presentation. Beta 3 sports a new iPhone-esque navigation bar that drops the back button and replaces it with a gesture that isn't limited to the bottom of the screen anymore.

The Verge had a chance to get an early look at Q Beta 3 and gives us some insight on how the new system navigation works. First off, the back button is gone. And Google found a radical way to replace it that might, no, will spark controversy. To go back, you need to swipe from either edge of the screen. The gesture is not accommodated by a sliding animation as it is on iOS, but Google's inspiration is pretty clear here. We've found some information at Android Developers that explains how developers have to opt out specific areas of their apps from the back gestures in order to maintain functionality. The DrawerLayout, the class responsible for sliding drawers, should be automatically opted out. (Update: We've installed Q Beta 3 ourselves now and the back gesture currently overrides the one that opens a drawer.)

When we take a look at the slimmer, longer navigation strip, the lack of a back gesture there makes sense – there simply isn't another swipe direction left. A swipe up reveals your home screen. To get to the recents screen, you swipe up a bit and move to either side.

Finally, you can swipe across the navigation area from side to side to switch between recent apps, in either direction. This builds upon the gesture changes present in Android Q Beta 2, which introduced the same swipe-either-way app switching to the old two-button gesture navigation.

While I imagine that there will be lots of schadenfreude and mockery, I'm happy with Google's full embrace of gestures. Android Pie's solution was half baked and introduced no real advantage over using on-screen buttons.

You can activate the new navigation gestures through settings in Q Beta 3, which is rolling out right now. Just search for System navigation and choose Fully gestural navigation, which even gives a detailed explanation how the rethought system works. 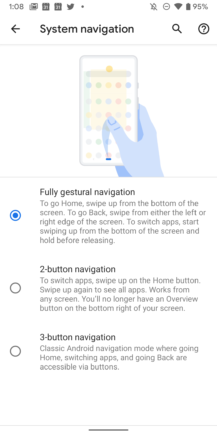 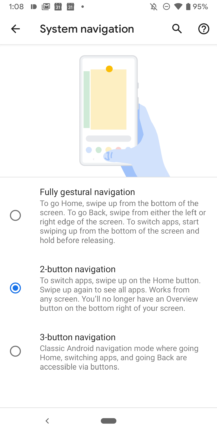 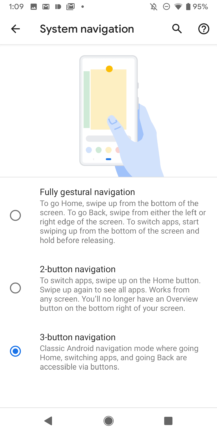 We've seen evidence of this new navigation system long before Google officially started the current Android preview program, and then some more through ADB commands in Beta 2. Also, Google tested similar back gestures in Chrome for its mobile OS.