As part of the Google I/O brouhaha, Google is announcing a handful of changes related to Search and the Assistant, all of which should help you get to the information you need faster — albeit in slightly different ways. First, Search will soon support a so-called "HowTo" markup schema for web developers and video makers, which will allow for their content to appear as results in related how-to queries. Second, Google is expanding App Actions to more deeply integrate a few new types of services including health, finance, and ride-sharing into the Assistant. 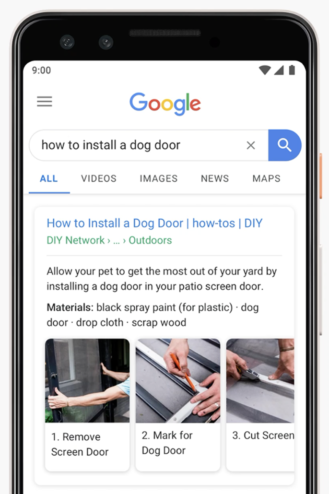 Google has already integrated plenty of schemas into Search that enable sites to better surface content in more useful ways, and the new how-to system seems purpose-built to help with one of the most common search engine uses. Those of us with stronger Google-fu might avoid the simplicity of asking Search a literal how-to question, but such plain queries are common, and having a precisely formatted means of presenting that information can answer questions that much faster, with less confusion, all in a standardized format.

The new how-to changes will enable marked pages to appear as results on both Search for mobile and for related queries on Smart Displays, providing folks with easy step-by-step directions all off of a single question: How do I [blank]? When it comes to videos, creators will need to upload a "HowTo Template" spreadsheet that includes titles, timestamps, and accompanying text.

App Actions debuted last year, changing the focus from the app level down to the granularity of actions (as you might guess from the name). That means rather than just being able to launch an app from your launcher or the Assistant, you can instead enter into a more specific task inside that app.

For the last year or so, most of us probably only thought of the shortcuts on the Pixel launcher when we thought of App Actions — if we thought about them at all — but they're also integrated into the Assistant. Some of those bubbly shortcuts offered at the bottom of the screen when making certain queries are actually powered by App Actions, and Google is rolling out four new categories of intents for developers to make use of: health & fitness, finance and banking, ride-sharing, and food ordering.

That means you can expect to see deeper integration of third-party fitness apps into the Assistant, and settling a bill with your friends could be as easy as telling the Assistant to send him the cash. That is, assuming developers implement the required intents. Google says the example in the GIF above was completed in less than a day by adding a single file, so hopefully, it won't be too hard for developers.

Google's Project Euphonia will improve how we understand impaired speech