One of the best parts about Google Maps, and the feature I use more than anything else, is navigation. There are a slew of options, from your typical driving to walking to even public transit (if there is any where you live). But walking while staring down at your phone can indeed be dangerous, so Google is adding AR walking navigation to Maps, with Pixels getting an early preview.

It works exactly like you think it would: hold up your phone and follow the arrows. No staring at the blue dot or trying to orient yourself correctly. Let Google guide the way with the beauty of AR while also giving you a map overview to help you understand where you are. 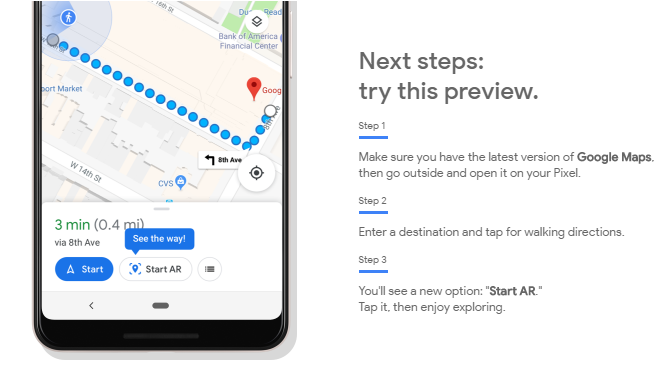 Google got the ball rolling on testing this feature earlier in the year, with access restricted to contributing Local Guides. Now it's finally time for broader public availability, with Pixel users first in line.

Details are otherwise scarce, so hopefully we'll know more about it in the next few days.

Over the past couple of days, Google has been sending Pixel users invitation emails to try out AR in Maps, so this feature has begun rolling out as expected.