It's no secret that a lot of us at AP have switched from Wear OS-running smartwatches to Tizen-based watches by Samsung. If you've been thinking of jumping ship too, the Gear S3 Frontier (my daily driver) is currently marked down to $110, an all-time low. 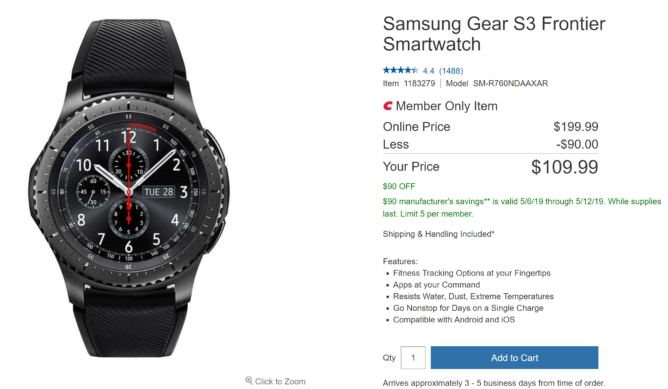 The deal originated at Costco, but Amazon's robots seem to have price matched it too. Purchasing it at Costco requires a membership, but the watch ships in a few days. Amazon, on the other hand, promises to ship it "within 1 to 2 months."

The Gear S3 Frontier was recently updated to Tizen 4.0, which added a quick settings panel and theater/sleep mode. The watch has a 46mm diameter and a 1.3-inch AMOLED display, so it's on the larger side. It's well specced, with an Exynos 7270, 4GB of internal memory, Wi-Fi, NFC, Bluetooth 4.2, and GPS. There's a built-in speaker for calls and media playback too.

Being the Frontier variant of the Gear S3 series, the watch has a sportier look than the S3 Classic, and swaps the leather band for a rubberized one. When it comes to durability, the watch is IP68 water resistant, with Gorilla Glass protecting the display. The 380mAh battery should last you between one and three days, depending on the power settings.

This is the last Samsung smartwatch to include an MST (Magnetic Secure Transmission) reader, which allows you to use Samsung Pay on any legacy PoS terminal. MST comes in handy as you aren't reliant on the payment terminal being NFC compatible, as you would be on a newer device like the Galaxy Watch Active, and it's the reason I'm not looking to upgrade from the S3 Frontier anytime soon.

You can buy the Gear S3 Frontier from Costco if you have a membership or can play the waiting game over at Amazon.

We sure hope you jumped on this when you first saw it, because the deal looks like it's already dead. Costco appears to have pulled the watch's listing, and over on Amazon you'll now only find the Frontier used or from third-party sellers — and none for as low as we shared with you here.