For the unfamiliar, in-display fingerprint scanners currently come in two varieties: optical-based solutions that shine a light from the screen itself against the finger where it's picked up by what is effectively a camera beneath the display, and ultrasonic ones that make a precise map of the ridges and features of your fingerprint by bouncing high-frequency sound against it and listening to the changes as it comes back — think tiny dolphins or bats inside your phone.

I've used ostensibly good examples of both types for months now, and even the very best among them provide no tangible benefit that I can find over previous solutions. They don't add anything to security, speed, or convenience; it's just a new location for the same feature.

Worse, in-display sensors add plenty of trade-offs compared to traditional capacitive scanners. I'm told by OEMs that optical readers make for thicker phones, ultrasonic sensors are expensive, the limited display coverage and inconsistent placement of current solutions are less intuitive in practice, both types are harder to find in the dark or by touch, and they work more slowly and less reliably. The non-convenience of having them built into the screen isn't worth those drawbacks — it's not like we need to free up space on the back of phones. 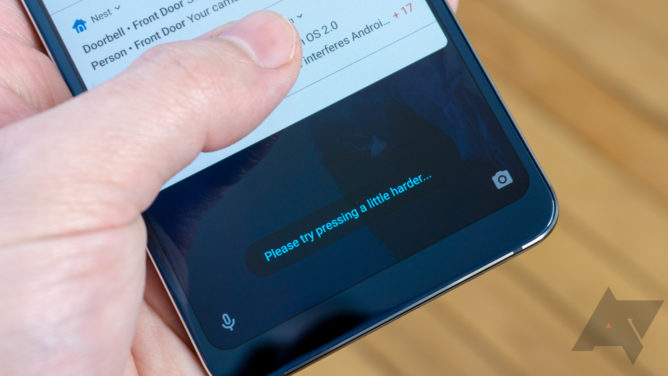 Welcome to the future.

I'm not alone in that opinion, either. AP's own David Ruddock, speaking of the ultrasonic sensor in the Galaxy S10+, said that it was "in all material respects a regression from the capacitive sensors in last year’s phones." Ryan Whitwam here also called the Nokia 9 PureView's sensor "a catastrophic mistake." (Admittedly, Nokia's seems to be one of the worst.)

Newer optical sensors in phones like the Huawei P30 Pro are — allegedly — as good as a capacitive sensor when it comes to both accuracy and speed, but they still offer an objectively worse experience in all those other ways, and right now we can't fix that.

Some have claimed that in-display fingerprint sensors offer a more natural experience in some way, but in or out of the display, front or back, it's all just a matter of habit; you get used to it wherever it is. There really isn't some grand, abstract, natural experience of unity with your phone's security that comes with poking the screen rather than the back or bezel.

I wouldn't go so far as to call in-display fingerprint readers a gimmick, but they definitely aren't adding any real value to the smartphone experience (even as they add real value to the price tag). Someday when the technology works faster, better, more cheaply, and across the entire display, in-display sensors may actually offer an advantage. But, our haste to realize The Future — paired with manufacturers' impatience for new, marketable features in a stale and declining market — pushed a compromised experience onto customers before it was ready, and that was a mistake.

Waterproof Kindle Paperwhite is back at $90 ($40 off), get yours while the sale lasts